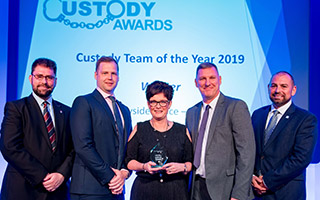 Merseyside Police Custody Team 2 were presented with the Custody Team of the Year award at this year's Custody Seminar and Awards 2019.

The judging panel were impressed by all of this year’s nominees and the incredible work they do, but overall felt the high-performing team deserved to be team of the year.

Despite high volumes of detainees to process in a very busy metropolitan area, they were praised for maintaining standards even in times of adversity; always putting the welfare of detainees first and ensuring the best outcome for victims as well as working to benefit partner agencies.

The team, who have been empowered by inspectors to take the lead and adapt depending the circumstances, continuously strives to improve with a ‘can do’ attitude despite changes to the custody settings over the last 18 months.

They have also been commended for their successful mentoring programme which will provide long-term benefit to the wider organisation by paving way for the next generation of police leaders with full understanding of custody and how it effects other areas of police business.

As well as participating in community engagement events including with local schools, they have been key in developing work with immigration partners; speeding up transfers to immigration holding centres. In turn this had made best use of interpreter time, maximising rights of detainees who are vulnerable by way of language barriers.

PFEW Custody Lead Clive Knight said: “Team 2 has shown exceptional dedication, going above and beyond to maintain standards to benefit both colleagues on the frontline and partner agencies even in the face of adversity. This is a testament to strong leadership skills within the team which in turn are filtered down to new recruits.”