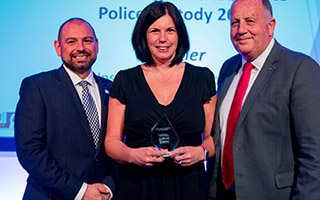 Inspector Katie Andrews of Derbyshire Constabulary was presented with the Outstanding Contribution to Police Custody accolade at the National Custody Seminar and Awards 2019, organised by the Police Federation of England and Wales (PFEW) and National Police Chiefs’ Council (NPCC).
The judging panel were impressed by all nominees and the incredible work they do, but overall felt Inspector Andrews’ level of dedication to the role was deserving of the top award.
Inspector Andrews joined her team at a time where there were some concerning issues flagged by inspectorates, so she wanted to shake things up.
With strong leadership, she has created a culture change and has managed to successfully improve custody provisions in her force, including the removal of anti-rip suits, in favour of more effective risk management.
With Inspector Andrews and the Constabulary being the catalyst for change, Derbyshire OPCC has played a leading role and driven this change for the better, in particular PCC Hardyal Dhindsa pushed for the pilot which was driven by his office and scheme managers Liz Kelly and Emily Wakeland. Together Inspector Andrews, the police and crime commissioner’s office (OPCC) and independent custody visitors have worked to improve the treatment of detainees, developing a new methodology for independent custody visiting and this has led to clear positive outcomes.
Children in custody are now seen quicker by an appropriate adult as well as improved joint working with partner agencies which has reduced the amount of time detainees spend waiting for mental health care.
She has also created new training programmes with an improved focus on diversity and equality with sign language videos for deaf detainees and better menstrual care for female detainees.
Whilst overseeing all this change, she was undertaking her masters degree where she presented a dissertation on the new ‘Derbyshire model’ for independent custody visiting.
This was shared and read by colleagues across the National Police Chiefs’ Council, Home Office and College of Policing. The then policing minister also wrote to the OPCC in Derbyshire and the Independent Custody Visiting to show his support.
The Independent Custody Visiting Association is working with six other pilot areas to trial the methodology that the OPCC led, with Inspector Andrews' support - this may lead to national roll-out, working with the Home Office to review and amend the Code of Practice for Independent Custody Visiting.
PFEW Custody Lead Clive Knight said: “The level of contribution by Inspector Andrews is superb. Through her dedication and hard work, the changes she has developed with her OPCC are likely to improve how independent custody visiting is conducted across the UK, bringing improvements for detainees for police staff and for public confidence in policing.”
This inaugural event to recognise a range of contributions to custody was jointly hosted by the PFEW and the NPCC, sponsored by Police Credit Union, took on 10 September 2019 at Jurys Inn, Hinckley Island, Leicestershire.