Blog: Suddenly I was down a bumpy road, alone and scared 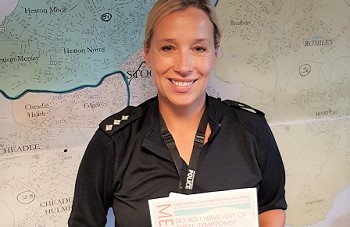 Today marks World Menopause Day, so I wanted to take the time to share my story, to educate everyone and to encourage my female colleagues to speak out.

This time two years ago my life was turned upside down. Psychologically and neurologically, I started to falter. Inexplicably, my mind just went numb and I had torrents of negative thoughts, all at cross purposes. Inside I had this awful sense of dread and I became prone to blind panic. Aged 47 I was experiencing perimenopause and I was totally unprepared.

Throughout my life – even when things were tough – I’d managed to remain positive. It was such a big part of my identity: proud, independent and articulate Helen. As a police officer I have faced danger and challenges time and again with a lion heart. Knowing how strong I can be always got me through.

Like a thief in the night, perimenopause stole this sense of identity from me. All of a sudden I felt lost and frightened and I lost who I was familiar with. It didn’t make any sense.

With three years to retirement I considered resigning. I was in a role of a lifetime working as the International Development Lead at Greater Manchester Police that included negotiating contracts with the Ministry of Interior of Qatar. I even spoke with their Prime Minister on equal opportunities for women in policing.

I was on a career high. Free of a mortgage or debt, our son happily in a career he studied for at University. My husband and I were making plans to retire early and travel the world. To an outsider, my life must have looked like a dream; I had everything I’d ever strived for.

My promotion to inspector brought no joy, only panic, dread and anxiety. It was as though I had spent my life zipping along country roads in a sports car, roof down, music blaring, blissfully unaware of what lay ahead. I now found myself lost on a rocky road, unable to see the road ahead despite the headlamps being on full beam.

I am still shocked by how quickly my work was affected. When I arrived at work, I would have to talk myself in to making it to my office. By the time I sat down the anxiety had already drained me; I felt frazzled and had convinced myself that I was useless.

My husband and I have enjoyed a healthy and loving relationship for 20 years but now there were nights where he’d be comforting me in the early hours as I cried, incoherent with unfathomable sadness. It was the start of a true test of our marriage; I had begun to feel invisible. Despite the love and friendship, I lost sight of all we had dreamed of.

Day in, day out, I was at my emotional and physical limit. I thought everything was slipping through my fingers. Things I used to find so easy became an uphill struggle. Driving, shopping, putting flowers in a vase. My cognitive functions were severely debilitated.

Why did this have to happen? How could I have been left in this invidious position after a life of hard work? The answer is all too easy - I had never been taught about the menopause. Nobody had warned me what was to come. Even my GP told me I was too young to be going through it. I finally decided enough was enough; I needed to rebalance before I totally burned out.

Once perimenopause was finally diagnosed, I could start to make some difficult decisions. I sought counselling and refocussed on what mattered to me, what I needed to thrive again. I finally found the courage to talk to my employer about what I was going through. Though it was one of the hardest choices I have ever had to make, I eventually took a break from work.

I felt like a failure for taking time out but to get my life back, afraid of the perceptions of others but I needed time to heal. I could focus on my relationship with my husband, on me and my family. It breaks my heart when I look back at what I put my husband through for many months of illness and recovery. He says he will always regret not picking up on the signs but nor did I. Menopause education and care in England is sadly lacking. The physical symptoms are commonly known and often mocked. But I was not prepared to feel such sadness, anxiety and loneliness.

Running on constant adrenalin tore me apart; physically and mentally. After much hard work from us both, thankfully, we are happy again and I can see now that policing does not matter more than my happiness, health and wellbeing.

I have always been a champion for women in policing and I think the challenges before, during and after menopause are the last taboo. We are an aging workforce, more and more women are going to find themselves in the position I was in.

Significantly, menopause coincides with being at the height of your career. It may sound like a cliché but this issue boils down to a matter of bend or break. Unless line managers are trained on the symptoms of menopause, unless they know how very serious it can be, we could see some of our most talented officers leaving the profession too early. Now that the national guidelines have been launched, I hope it will bring about some positive change.

A little understanding goes an awfully long way. It is time for a sincere and open conversation about the menopause and the impact it has on work-related stress.

Chief Inspector Helen Smith returned to her response role at Greater Manchester Police 16 months ago and is happy the Hormone Replacement Therapy (HRT) has so far been effective. She continues her campaign to make sure other women have the education they need to prepare and the support they need to cope when symptoms begin.