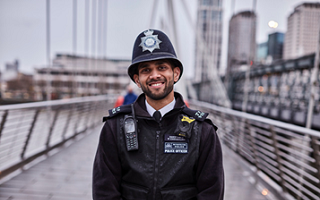 I was never sure what I wanted to do as a career. I spent my university years studying various courses, mostly involving software engineering and coding, and although I achieved high grades I knew it was not what I wanted to do. It didn’t excite me, and I really wanted a job that involved helping people.

In 2013, I made the decision to apply to the Metropolitan Police Service (MPS). I had been a fan of superheroes growing up and being a police officer seemed the closest I could get. My family were immediately apprehensive and vocally against the idea. First, authority figures were generally considered corrupt and wicked people in Bengali culture. Secondly, and more importantly, our family experience of police in the United Kingdom was quite negative.

My parents had worked hard to afford a house in an affluent area, which seemed completely dominated by white, non-Muslim people. We never foresaw this being an issue for us, and it wasn’t something we even really noticed when we first moved to this area. However, it didn’t take long for us to become the target of constant harassment and anti-social behaviour, ranging from litter being flung into our garden, to our cars being set on fire. We contacted the police multiple times, but never received a positive outcome. It is a shame that this behaviour, which I now can identify as having been racially and religiously aggravated abuse, was just considered the norm for my family and me.

Deep down, I knew that I wanted to contribute towards a more positive perception of police among the Bengali population, and I also wanted to improve the quality of service that the public receives. However, I had my own personal trepidations and fears about becoming a police officer, due to my autism. Although I am diagnosed with high-functioning autism, it is certainly something that affects me daily. I have felt held back by my autism for most of my life, especially in social circumstances. It didn’t help that media has a tendency of illustrating autistic people as being superhuman, possessing hyper intelligence, but that isn’t true for most autistic people. I felt that I would either feel isolated as a police officer, or that I would have impossible expectations to meet.

Since I became a police officer, I have had a number of varying roles. I have always tried to hit the ground running, regardless of the task in front of me, and I feel a deep necessity to be as hard a worker as possible. It did not take long for me to discover that my strengths and passions lay in equality related work, and in improving community relationships with police.

Beginning my career in Greenwich was a real blessing for me. The borough is a melting pot of cultures, ethnicities, and identities. I felt myself genuinely creating a positive impact on many communities through my actions, by representing MPS at cultural and religious events, and by creating conversations with community leaders about community issues.

These experiences naturally translated into my transitioning to the Online Hate Crime Hub, which soon became the Central Hate Crime Hub. I became a representative of MPS for hate related matters on a national scale and I was in a position which allowed me to directly influence policies and relationships with key partners. I dedicated my time and energy towards projects, ideas and initiatives that I believed would have the most positive impact on minority populations and I contributed towards the forming of a central team that could provide critical support to officers across the MPS rank spectrum.

Many of my efforts concerned improving the standard of service provided to victims of hate crime. These efforts included creating a devoted hate crime risk assessment to be used in every instance of perceived hate crime, developing a hate crime booklet that can educate officers whilst providing victims with helpful information, and recreating the MPS hate crime policy to be more victim focused.

I have moved on from the Central Hate Crime Hub and have since been working within MO6. Here my role involves supporting officers in public order related incidents so that the MPS can operate as efficiently as possible and involves the initiation and follow-through of complex operations which carry heavy reputational risk.

Despite this move to a more dynamic role, I have retained my passion for equality related work. During the Black Lives Matter protests I recognised a distinct lack of support available for ethnic minority officers and endeavoured to provide safe spaces for officers to communicate freely and openly. I am also currently leading on a project designed to give young people the tools to become positive changemakers in their community and to overcome challenges presented to people of minority populations.

If you think you may be a victim of hate crime in your workplace, please contact your Fed rep – they are there to support you.