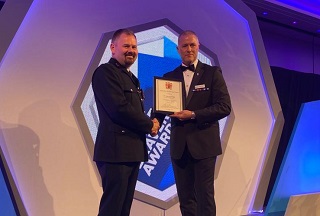 The winner of this year’s Inspiration in Policing Award is PC Sean Burridge of Surrey Police. PC Burridge was presented with the accolade by National Chair Steve Hartshorn at the National Police Bravery Awards ceremony on 14 July in London.

With over 20 years’ service, PC Burridge is a Federation Rep, Mental Health First Aider and since March 2020, has been a Wellbeing Consultant for a collaborative team made up of Surrey and Sussex Police officers.

In March 2020, he joined the Wellbeing Team and has taken on the mental health portfolio, offering colleagues from both forces CPD talks about his own lived experience with PTSD. He has also helped to set up the first UK policing PST Support Group and coordinates Mental Health First Aider and Defuser Training for all forces.

PC Burridge has also created the highly acclaimed ‘Smash the Stigma’ webinar series, for which he has cultivated and presented sessions around Mental Health, Men’s Health and Suicide Prevention. He is currently working on a new support initiative, Suicide First Aiders, for roll out across Surrey and Sussex.

PC Burridge is always on hand to answer calls from colleagues seeking support and on several occasions over the last year, these have included colleagues contemplating taking their own lives.

In amongst his day job and additional work in providing support to colleagues, PC Burridge finds time to cover school runs for his children and to help out his local school by driving the school bus on school trips. His duty of care and commitment to both forces, whilst coping with his own mental health struggle, make him an inspiration to everyone.