Cops are in crisis and so are forces 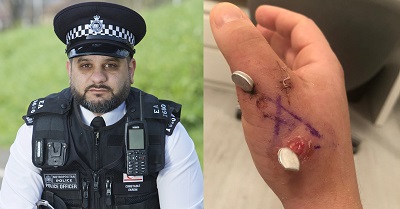 The thin blue line is broken along with the police officers holding it, a grim Channel 4 Dispatches programme has demonstrated.

‘Cops in Crisis’ has laid bare the reality of policing, with police officers struggling to meet demand and the service deteriorating under a significant lack of investment.

The Police Federation of England and Wales (PFEW) surveyed members to gather hard-hitting statistics for Channel 4 to air on thousands of screens across the UK.

More than 60 per cent of respondents said physical attacks without a weapon had increased, compared to attacks before the pandemic.

In the year ending March 2021 there were almost 37,000 assaults on police officers in England and Wales, a staggering 22 per cent rise on the previous year. This amounts to over 100 assaults per day, every day of the year.

Last year, more than 26,000 calls for emergency assistance were made by officers on the frontline.

PC Aksit Ekrem knows all too well how dangerous and unpredictable the unique role of policing can be after being attacked with a sword when responding to a routine domestic incident call on a late shift, where a woman had reported a male in behaving violently.

Upon entering the property, the man in question attacked PC Ekrem.

“I took a step forward to get closer to him, and then he jumped out of his seat – the next thing I see is he has got a huge sword and he is ready to swipe it down at my head. My first thought was if that sword hits my head I’m going to die,” he recalled.

PC Ekrem dived down to avoid him, but did not manage to move quickly enough as the man swung the sword down into his hand.

Aksit underwent a gruelling five-hour operation to repair his hand, and it had a huge impact on his life.

“The bone connecting my thumb to my hand had exploded into fragments. It really dawned on me afterwards that I could have been killed,” he said.

“I was disabled for six months and had to learn to do things one handed. I had a six-month-old baby at the time and two other kids. I tried doing as much as I could with one hand, but I couldn’t even do my laces.

“Until you have something happen to you, you won’t feel that heighted risk all the time. It could be something as simple as a stop and search or pulling a vehicle over for a traffic matter, because you don’t know if that person is going to drive at you, or they might pull a weapon out – you just don’t know.”

Impossible workloads and demand outstripping resources was a strong theme throughout the programme in addition to the assaults officers face. The outcome of this theme is often seen in victims being failed.

More than half a million reported crimes were screened out last year, research from Channel 4 revealed, whilst detection rates have fallen over the past five years, with just 5.6 per cent of crimes resulting in a charge or summons.

Claire, a former detective sergeant on a specialist child protection team, became ill health retired due to the nature of the role impacting her mental health severely, with her department massively understaffed.

“We had screenings and a wellbeing questionnaire, then there would be a score, and if you were under a certain point occupational health would come and see you. I failed them every time, and my colleagues failed them too.

“I went into work, and it was really busy. I remember looking at my colleague thinking, ‘I can’t hear you, I can’t hear what you’re saying’. I looked at the computer screen and the letters and words were jumping everywhere. I started crying and couldn’t stop.

“I went home and cried for the whole weekend – I felt like I was letting everyone down. I contemplated suicide quite a few times.”

Claire was medically retired after being diagnosed with post-traumatic stress disorder.

An FoI submitted by the programme found 55 per cent of officers who have retired on medical grounds did so for mental health reasons.

In the past year, police officers were off work with mental health conditions for 571,000 days – the equivalent of 1600 officers being off for a year. Some forces have seen a 40 per cent rise since 2019.

PFEW National Chair Steve Hartshorn said: “What we have here is even more compelling evidence proving the thin blue line is broken and so are our hardworking police officers.

“With resources stretched, officer safety is jeopardised as they are more likely to be assaulted when single crewed if they intervene in a situation, and many are overwhelmed from impossible workloads. They are burnt out and under immense pressure.

“As a service of last resort, police are spending hundreds of hours not dealing with crime, such as responding to callouts involving mental ill health, and we will see over the coming weeks officers stepping in to pick up the pieces the country is left in due to strike action.

“Police officers join the service for one reason, and that is to help people. The last thing they want to do is let victims down – but without sufficient investment in policing, officers cannot keep up with new the technological innovations criminals use, will not be able to stretch resources to attend all crimes and, ultimately, will not be able to keep communities safe from the rise in violent crime.

“The service not only needs a significant, long-term funding deal to rescue it from collapsing, the Government must also invest in our police officers who put their lives on the line 24/7, 365 days of the year and commit to pay rise which takes into consideration the cost-of-living crisis. If they do not, I’m afraid the service will not be able to recruit and retain the officers it so desperately needs. In fact, 60 per cent of police officers said they have considered resigning in the past year.

“The Government needs to wake up and pay attention to what is happening, and I would strongly encourage MPs to watch Cops in Crisis if they haven’t done so already.”

Cops in Crisis: Dispatches is available to watch online here.