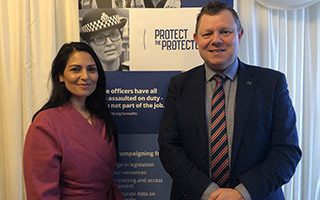 The Home Secretary led the praise for the Police Federation as a 'campaigning force for its members', at an engagement event in Parliament on Wednesday.

Priti Patel stopped by a reception arranged by the Federation’s Parliamentary Sub-Committee and discussed current policing issues with our National Chair John Apter, members of the National Board and branch chairs.

She described the work of the Federation as 'vital' and added: "As Home Secretary I am a champion of the police covenant and for doing everything possible to support the health and wellbeing of officers – ensuring they have the support and are empowered to do their jobs but we look after their welfare first and foremost.”

The event was an opportunity for the Federation to meet with new MPs and strengthen relations with existing ones and was open to parliamentarians from across the political divide. Each MP who attended was given a booklet explaining what the Federation is and what it does, with contact details for their local branch.

National Vice-Chair of the Police Federation of England and Wales, Che Donald, explained: “We hosted the event specifically to highlight the concerns that our police officers face on a day to day basis. The topics we covered were varied and included police driver protections, our Time Limits campaign, pay and conditions, pensions and the police covenant – so it was a really positive event delivering those key messages to MPs and representing our members.”

The event was sponsored by Philip Davies, the Conservative MP for Shipley who is a long-standing supporter of policing. He praised the PFEW as “fantastic advocates” for policing and the frontline officers who “deliver the reductions in crime that my constituents want to see”. He added: “I’ve always believed that the people who know best about anything are the people who are doing it every single day, they know what works and what doesn’t – so we need to listen to our police officers and the Police Federation.”

Labour’s Shadow Police Minister, Louise Haigh, also called PFEW a “campaigning force for its members”. She went on to say, “I really value the work and experience you bring on behalf of frontline officers, so that we can work together on campaigns” – mentioning police drivers, Time Limits and the legislation for a police covenant later this year.

She added: “Thanks to the Police Federation for the great work you do.”