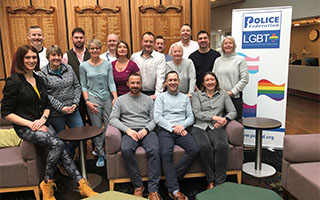 A new group has launched for Police Federation of England and Wales (PFEW) representatives who identify as LGBT+.

Ian Ashton of Lancashire Police, and Martin Whitehouse of the Devon & Cornwall force, were elected Chair and Secretary respectively of the Police Federation LGBT+ group at its inaugural two-day seminar in Leatherhead on 13-14 February.

The remit of the group, which was the brainchild of PFEW National Board member Ian Saunders, is to encourage more LGBT+ officers to stand for election as Federation reps and ensure LGBT+ voices are better heard and understood within the organisation.

PFEW National Vice-Chair, Ché Donald, said: “This is definitely the way forward, and a really exciting time for the Federation. We are reshaping the organisation to be truly representative of our members no matter what they look like, what their sex is, or their sexual orientation.”

He praised Fed Reps who have joined the group already as “altruistic”, having signed-up to look after the public, their police colleagues and now as activists for the cause of recruiting and retaining LGBT+ reps.

Mr Donald added: “They are also raising the platform for LGBT+ issues within the Federation. We will ensure they are given all the necessary help and support to make it a success. I’m certainly looking forward to what they bring in making us better fit for purpose.”

The seminar discussed how to develop the Federation Rep role and received learning on the Equality Act. It also heard from Ayla Holdom, who gave a personal talk on her Coming Out as Trans experiences while serving with the National Police Air Services (NPAS). It touched on how she was greeted awkwardly by colleagues at first, and gained acceptance.

Mr Ashton said: “It’s not good if an LGBT+ officer needs support but their Federation board doesn’t have the knowledge of what they are going through. It can be a great advantage to have someone there who ‘gets it’ and understands their perspective.”

Mr Whitehouse pointed to the officer uplift as a challenge to be met. “When we talk about recruiting Fed Reps,” he said. “If they don’t see themselves represented in the Federation, why will they be part of it? Our role will be to make sure the next generation sees a Federation that gets their values and represents them.”