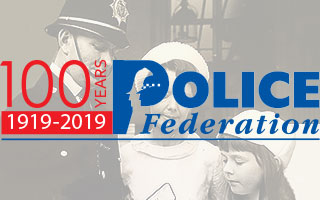 The Police Federation of England and Wales (PFEW) will make history today when we gather in the London venue which hosted our very first conference almost exactly a century ago.

National Chair John Apter will welcome around 700 delegates including Federation reps and staff, Police and Crime Commissioners, Chief officers, charities and other special guests from throughout England and Wales.

Our Centenary Event has been made possible by sponsors – Accenture, Police Credit Union and Police Mutual. It will hear from officers who have been helped by the Federation, there will be a senior policing panel debate and we will look ahead at future priorities. Metropolitan Police Commissioner, Dame Cressida Dick, will present the Women in Policing Award and the Home Secretary will deliver a keynote speech.

Mr Apter said: "I feel incredibly privileged to be the National Chair of this organisation during our one hundredth year. In 1919, when we were formed by an Act of Parliament to be the voice of rank and file police officers, few expected us to last as long as we have but here we are a century later, still going strong. For sure, we’ve had our challenges, but I’ve seen colleagues whose lives have been made better – and in some cases saved – by the work of Federation reps.

"This event is an opportunity to pause, take stock of what we’ve achieved and then to go forward in building a Federation that can endure for the next 100 years and beyond. It’s also an opportunity to thank our local Reps for what they do, they are the backbone of our organisation and they are the ones who make a difference, every day."

We have produced a commemorative brochure which features personal stories from police officers and Federation reps who have been part of our story over the decades. In keeping with tradition, now that the Federation has reach the age of 100 it has received a letter from Her Majesty The Queen, which is also printed in the brochure.

The Police Act of July 1919 made it unlawful for police officers to take strike action and established the Police Federation of England and Wales as the official representative body of officers from the ranks of Constable to Chief Inspector. The first conference took place at the Central Hall Westminster on Monday 17 and Tuesday 18 November 1919.