Chief defends decision not to intervene in statue protest 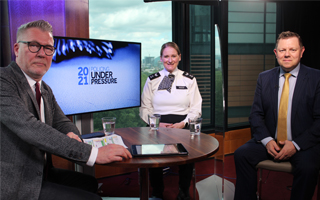 Chief Constable Andy Marsh has defended his force’s actions during the toppling of the Edward Colston statue in Bristol.

In a discussion about policing protests at the Police Federation’s Annual Conference, Avon and Somerset’s most senior officer insisted that if officers had intervened to prevent the statue from being rolled into the river they may have been seriously injured.

Recalling the events in Bristol last summer, Mr Marsh said: “From the first CCTV footage of rope being around the statue, it was less than two minutes before it was on floor.”

Mr Marsh said it was the Goldilocks dilemma – for some the policing response is too strong, for others not hard enough. He added that charges have been brought against several individuals over the statue incident and eight are being prosecuted for the serious violence against officers at Bridewell Station this year.

“We are far from finished with those charges – when people see the footage of what those officers dealt with their jaws will be on the table,” the chief said. He also spoke about two officers who bore the brunt of the violence. A container of urine was thrown over one, and another’s helmet had been split.

PFEW National Chair John Apter, who took part in the session, said he “bitterly regrets” criticism he levelled at the force over the statue incident, saying: “I have no doubt now that officers would have been seriously injured if they had been deployed, it was absolutely the right decision.”

Mr Apter warned about ‘agitators’ who on a number of occasions have taken any opportunity to turn a protest violent.

One such protest in Hyde Park, against lockdown and anti-vaccination, was described by Met sergeant Nikki O’Malley who was deployed there.

She reported: “Some of my colleagues have lost family members to Covid and were being attacked over people having to wear a mask. That was tough. Some officers had sick family members at home.”

Nikki had radioed in that the mood in Hyde Park was turning and the crowd becoming more aggressive. There was alcohol involved and an order came from higher up to seize the music equipment.

Officers were wearing normal beat uniform and a number were badly injured.

Nikki added: “There were a lot of questions from PCs about why we were not in protective gear.”

Mr Apter said there is a growing frustration among colleagues that bosses are more concerned about “how it looks to have officers in riot kit, rather than the safety of the officers”. He said: “I will always fall on the side of the safety of colleagues."

Inspector Kim Brown, a Bronze Commander in Cumbria, also contributed to the session, to say officers are likely to be deterred from public order policing unless more pre-emptive work is done to educate the public that officers in public order kit, does not indicate there will be conflict.