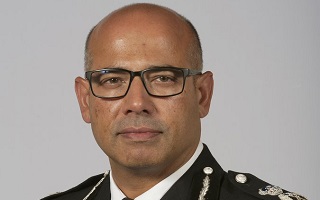 I was flattered to be asked to write a blog to help the Police Federation of England and Wales (PFEW) celebrate Black History Month (BHM) and overjoyed it was by the first black chair of the first PFEW group established to specifically support Black, Asian and Minority Ethnic officers. What a watershed moment that is.

I must admit that I don’t like BHM. Not a very politically correct start to a blog from a person recently described as the ‘superwoke so-called head of counter terrorism’ by a particular journalist.

I don’t like BHM because I don’t like the fact that we need a special month to recognise and celebrate black achievement or understand racism. In my utopian world we would not need to talk about the way people treat us because of the way we look or remind people of our contribution to humanity.

Now I’m not black, I’m mixed race - White British (Welsh) and Indian. But I was proud when a black member of the Metropolitan’s Race Independent Advisory Group (IAG) called me a ‘close cousin’ recently, largely because he knows I understand his struggle and that of his brothers and sisters, and that I have a long life experience of dealing with racism myself.

I wrote a couple of blogs after the killing of George Floyd. The first was to ask my white colleagues to look out for officers and staff of colour who might be feeling anxious, both questioning their vocation (having watched a white police officer kill a black man on live TV), and taking questions from their own family, friends and communities about why they joined. It mattered not that it was an act that happened thousands of miles away in a jurisdiction and policing system with surprisingly little similarity to our own British way of policing, it still hurt.

Lots of people wanted to talk about how they felt and their own experiences and it’s good we’re still talking now. A few disliked the fact that they might now be singled out and did not want to be treated as victims. Others wondered what the fuss was about, having not experienced any racism in their beloved profession. All these feelings were equally valid but regardless, a lot of people did want to talk about it. Good I say.

But I made a mistake in that first blog, as my white colleagues also faced brutal and unfair chants of ‘racist’ as they policed the frontline with remarkable restraint and professionalism (a comment that wasn’t carried in my one and only TV interview on the subject). So, I wrote a second blog called ‘balance’ on the back of what had become a polarised and scarring debate. ‘If you’re not with us then you’re against us’ became the stupid battle cry.

This is not the way to create a safer society. What’s missing is understanding and empathy for each other, whatever our life experiences. I am lucky to police the most diverse city in the world. Nine million people, over 40% of colour, speaking every language and practising every religion under the sun. I couldn’t possibly learn all their glorious diversity or expect anyone else to, but they all have one thing in common - they’re all human beings. If we can begin to understand their experiences, we can begin to understand how to serve them according to their need, because without fear or favour does not mean treating everyone the same. No two people are the same. I’m afraid a National Centre for Applied Learning Technologies (NCALT) package from the College of Policing or mandated diversity training simply won’t work. You must have a conversation with people to understand them, and you must want to listen.

We should, as a profession, recognise that though there should be no hierarchy in diversity, there actually is. The burning platform (literally in the US), is our relationship with the Black African and black Afro-Caribbean community, where in London we have by far the biggest confidence gap. Young black men have the worst experience in every aspect of society: health, education, employment and the criminal justice system. There is a reason for that, and years of inequality, deprivation and poor treatment play a huge part.

Use BHM to try and understand why. We should all find resources to educate ourselves. Popular culture helps. I like to read - To Kill a Mockingbird and The Colour Purple and anything by Akala or David Olusoga will help you understand. I also like movies - watch In the Heat of the Night or Crash – two of my favourites.

The reality is we are all prejudiced but very few of us are malicious about it and want to do others harm. If we can understand why we are prejudiced we have a chance to change the way we behave (and hopefully the way we think) and that will make the biggest difference in levelling the playing field or improving our interactions with people who look different from ourselves.

And when the people in power recognise that only they have the power to effect change then change will happen, but not before then. Black people didn’t abolish slavery, white people did, fighting and dying in large numbers against other white people to uphold an idea that people were created equal and deserve an equal opportunity to make something of themselves.

What’s happening in the United States as I write is deeply shocking. I hope it’s a beginning not an ending. In 2016 when Obama left office, I believed him when he said there was no better time to be born a person of colour than 2016. My parents’ experience was worse than mine, my children’s experiences were better than mine. Things were getting better. I sometimes wonder if things began to change for the worse in 2016.

Nevertheless, like Obama I believe in hope. I hope things will get better and that the killing of George Floyd started a discussion that will drive us forward, even as the actions of a few seek to drive us backwards. You don’t need to study history, apologise for the actions of ancestors or even read my favourite books and watch my favourite films. You must reach out and speak to someone who looks different from you. They’ll tell you where they’ve been, what they’ve seen and where they want to go. It’s a small step on a road to recovery. As a friend said to me recently, ‘discussion matters’.

Policing is my second family. I love it and I don’t want to do anything else. I always want my family to succeed. At one of our officer’s leaving dos, she was described as an officer who expected everyone to be treated like a beloved member of her family, whether they were a suspect or a victim. A leader of immense courage and values who broke many glass ceilings in her time, it reminded me that we should treat each other as well as the public in her spirit and hold each other to her standards.

Thank you for reading this. I’m proud to serve with each and every one of you. You are remarkable people in a remarkable job in a remarkable country with the best policing in the world. Yes, we can be better, but don’t forget we are already very, very good indeed. Stay safe.