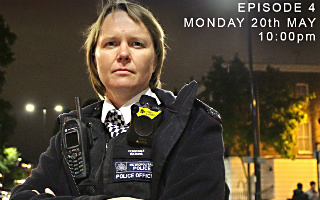 The terrifying dangers which police officers can face as they protect the public will be powerfully illustrated in a TV documentary on Monday (20 May).

Featured in the final episode of Police Code Zero: Officer Under Attack, on Channel 5 at 10pm, will be two heart-stopping encounters with knife-wielding criminals, which could easily have ended fatally for the Metropolitan Police officers involved.

In the first incident, four officers are lured to a property by a fake 999 call. They are confronted by a man wielding a large kitchen knife who stabs PC Rafal Kedziora and leaves another officer trapped, after she falls and hits her head on the garden path. PC Star Said-Ali, also involved, says: “I remember … all I could hear was just my own screaming. I thought I died.”

Once out on the street PC Launa Watkins draws her taser, which prompts the knifeman to throw the knife at her head. She says: “He's heard me shout [Taser] and he’s turned around and looked at me and he's thrown the knife at me, which has come flying past my head.” Fortunately, the knife misses and PC Watkins is able to activate the Taser.

Their attacker was found guilty of three counts of grievous bodily harm (GBH) with intent and one count of attempted GBH at the Old Bailey on 16 April and will be sentenced shortly after the programme is broadcast.

Viewers will also hear from Sergeant Carroll Weeden, who witnessed a knifepoint robbery in North East London. The thief attempts to make-off on his bicycle and Sergeant Weelen chases him down and slams herself into him, trying to stop him. But the determined offender uses his knife against the officer. She says: “I felt something going into my arm. I didn’t register it at first, it happened so quick. And then as I turned around he’s tried to go again towards my face and neck.”

Sergeant Weeden was not seriously injured but she was left deeply traumatised by the incident. She explains: “Dealing with this assault broke me. I could have been dead. I hadn’t even prepared not to come home that day. I hadn’t prepared to say goodbye to my kids. You don’t expect to go out and possibly not come home again. Sergeant Weeden’s attacker was jailed for four years.

The Police Federation of England and Wales (PFEW) has worked with the production team on Police Code Zero, which echoes the themes of our Protect the Protectors campaign, highlighting the dangers police officers face, how commonplace assaults are and the terrible toll these take on our brave police officers. The campaign resulted in a new law making it an aggravated offence to assault an emergency services worker and PFEW is continuing to press for stronger sentences.

Watch the latest episode and previous ones here.