Sometimes you need to just back off from body armour

At the start of BackCare Awareness Week 2021, Wellbeing Lead Belinda Goodwin, and National Board Lead for Operational Policing Steve Hartshorn discuss what PFEW is doing to support members with issues caused by body armour – and how members can prevent back problems.

Body armour is a mandatory and essential piece of personal protection equipment which saves lives. It can be cumbersome, and the addition of other items of kit can have a significant impact on back, shoulder and spine. 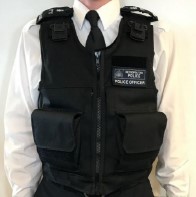 Recently, PFEW’s successful Back to Basics initiative helped to raise awareness of ways to prevent back issues associated with body armour. But there is still more to be done.

The first Home Office Body Armour Standard was written way back in 1993, and forces began to make it mandatory in the late 90s – which means there are near 30-year veterans who have been wearing it for three decades. Even for the fittest amongst us, body armour could be a cause of major strain on the back.

For many years, PFEW has been at the forefront of research. As part of the National Body Armour Working group, we work closely with the National Police Chiefs’ Council and other policing organisations such as the Home Office and force health and safety leads.

Wellbeing Lead Belinda Goodwin recently attended Human Factor Testing of Generation 3 body armour, which featured colleagues of all ages and sizes, and was administered by Greenwich University. She believes – particularly due to the increased levels of violence policers officer are facing – this could be a generational game changer.

Belinda said: “Although nobody should expect to be assaulted while doing their job, the reality for any police officer is different.

“The Gen 3 body armour should be rolled out next year, and although the human skeleton is not built to regularly carry any kind of heavy weight, we hope this will provide better cover, be more flexible, less weighty, and the weight will be better distributed.

“Members fully deserve the very best protection money can buy – and Gen 3 is a welcome advance to the body armour currently provided to police officers. PFEW will always be at the forefront of any advances in this area of PPE, and for years we have been campaigning for better coverage.

“This includes looking at the impact on female officers and the best bras to wear under body armour. PFEW commissioned this work, and we are awaiting the outcome of this important study.

“We know also some forces mandate the fitting of body armour every 12 months, which is a really good practice. As a federation, we would like to see this replicated around the country.

“We need to get the word out to colleagues that although body armour is mandatory - when it’s safe to do they should take it off. Far too many of our colleagues keep it on when they enter a station to do a crime report, then three hours later realise they still have it on.

“Some members also carry unnecessary items on the cover of their body armour which adds to the weight on their back, necks and shoulders. We are trying to encourage these individuals to remove items they don’t need.”

Even the Gen 3 armour won’t prevent back pain if it’s used incorrectly or badly fitted. And National Board member Steve says forces need to do more to tackle these issues.

Steve said: “We have been working with experts from Flint House, North-West Police Treatment Centres (Harrogate and Auchterarder) and the North-West Police Benevolent Fund to share ways to help ease the strain.

“We are also working with forces to remind them of their responsibility to look after officers’ welfare and encourage good practice around body armour care, storage and checks following damage.

“We really need them to implement mandatory refitting every year – particularly for colleagues who return to work following long periods away from work or wearing uniform.

“As a former firearms officer, I personally know the importance of properly storing body armour correctly. Colleagues need the correct storage for their armour, so they can hang this correctly and be ready to be used for the next shift.”

So, what should members do if they are suffering from back pain and believe body armour may be a contributing factor?

Belinda added: “First port of call would be their GP to begin a referral to a specialist. Then they should tell their force, so their Occupational Health can develop a personal plan which allows members to benefit from reasonable adjustments and improve their condition over time.

“If there are still issues, it’s best to have a chat with the local Fed branch.”