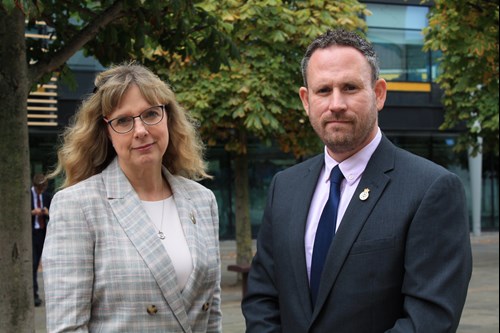 The police service should never forget the sacrifices that officers make, Norfolk Police Federation has said.
Chair Andy Symonds was speaking before this year’s National Police Memorial Day service in Belfast, where members of the police family gathered to honour their fallen colleagues.
Andy was joined by Secretary Sam Hawkins, and families, friends and former colleagues of the fallen on Sunday 25 September.
Andy said: “This annual event is really important and we never, ever forget the sacrifices that our colleagues and friends pay in the line of duty.
“We’ve had 10 officers in Norfolk that have sadly died or been killed on duty, starting in 1907 with the last one in 2003, so it’s really important that we never, ever forget, and we pay respects to them and their family and loved ones.
“This is a difficult day every year and these events bring back those memories. But it’s important that, however long that death or being killed on duty is, that we continue to remember them forever.”
Andy said the event was especially important for families, to ensure they maintain that connection with the police.
Sam added: “There is real gravitas and the poignancy at this event. Andy and I visited the RUC memorial gardens, and over 300 officers were killed in The Troubles and on duty and it just really brings it home. It is really quite special to be here in Belfast, to see everybody from across the UK recognising the sacrifice officers have made.”
The names of officers who lost their lives over the past year were read out at the event by Liam Kelly, chair of the Police Federation of Northern Ireland. They are: PC Daniel Golding, of the Met; PC Craig Higgins, of Greater Manchester Police; PC Alex Prentice, of Northamptonshire Police, and PC Darryl Street, of the Civil Nuclear Constabulary.
Home Secretary Suella Braverman, who gave a reading during the service, said: “To all the officers who lost their lives while working to keep us safe, we thank you and we honour you.
“Their bravery and commitment to their duty was unfaltering – society owes them and their loved ones a debt we cannot repay, but it is one we will not forget.
“As Home Secretary I make a promise to give police the powers and tools they need to do their jobs safely.”
During the service, candles were lit by relatives in remembrance of officers throughout the country who have lost their lives – one from each of the four nations of the UK.
Representing Northern Ireland was Stephen Wylie-Young, son of Constable William Raymond Wylie QPM. Stephen was just six months old when his father was murdered.
Representing Wales was Sgt Lowri Davies, daughter of PC Terence John Davies, of Gwent Police.
Representing Scotland was George Barnsley, friend and colleague of DS William Ross Hunt, of Strathclyde Police.
And representing England was Kathryn Dumphreys, widow of PC Nick Dumphreys, of Cumbria Police.
There was silence as petals of remembrance, representing all who have lost their lives, descended from the gallery as the Last Post was sounded.