Policing Protests: The first priority of the force must be to protect its police officer 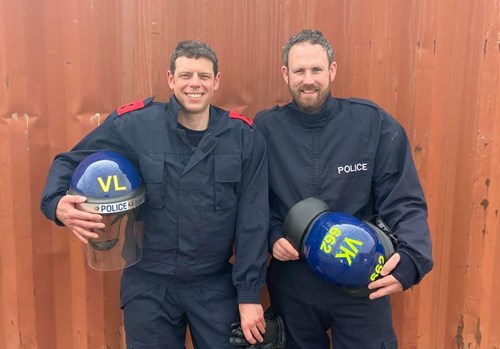 Policing Protests: The first priority of the force must be to protect its police officers

Andy said: “We have all seen the ugly scenes recently from the Met and GMP in which officers sent to keep the peace and police the protests coming under attack from thugs who seem to think that police officers are targets to attack.

“We’re not a target, we’re people who have chosen a vocation which involves policing the communities we live in. We are mothers, fathers, brothers and sisters just like everyone else, we have feelings, we’re not robots that we can just flick a switch at the end of the shift. We take things home be that physical or mental injuries.

“Officers seems to be coming under attack for reasons that have nothing to do with them being police officers but to do with subjects that people have a right to protest about peacefully.

“However these protests are becoming an area in which officers are becoming victim of serious injuries, many of them either life threatening, life changing and career ending. Therefore the policing of these protests must be done by properly trained police officers who have the right protection in terms of kit.

“I am a PSU trained officer and only recently attended my annual refresher training (pictured with Suffolk Police Federation colleague Ben Hudson). For me it’s important that even though my full time role is in the Federation that I still experience policing. Nothing replaces first hand experiences, it makes me a better Fed Rep.

“This role is voluntary and is a high-risk role due to the nature of the type of policing PSU officers get involved in. Therefore, I take my hat off to those officers that volunteer for this role.

“In turn forces must protect officers by deploying officers with the right kit. We have the current issue of forces trying to balance public perception in officers in full PSU kit policing protests however my view is simple - the first priority of the force is to protect officers as much as possible and to mitigate the risk of injury.

“Therefore I will be taking the opportunity to speak directly with the public order commanders when in Norfolk we have a deployment of officers to police protests. I will make it crystal clear that officers must be protected as a priority. We cannot police a protest when officers are regularly getting injured.”