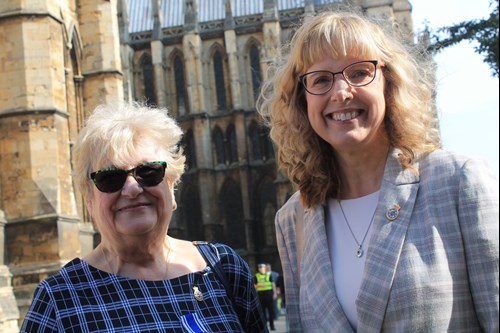 Norfolk Police Federation has joined colleagues from across the country in honouring the thousands of police officers who have died on police duty.

The annual event honours more than 5,000 officers who have lost their lives on duty. It was the first time the police family had gathered together for the National Police Memorial Day since the COVID-19 pandemic.

Sam was joined at the poignant event by Bobbie Knowles, whose Norfolk Police officer husband DC Terry Glister was killed on duty in 1987.

“Offices make the ultimate sacrifice sometimes,” Sam said. “And sometimes, with everything that’s going on in the world, it can be easy to forget that.

“It’s so important we remember those who have given their lives. It’s lovely to be able to bring Bobbie along today. It will be bittersweet for her, but I know it will mean a lot.

“The memorial day is so important for the police family and for the public too so that everybody can remember officers who have lost their lives on duty.”

Bobbie’s son Mark followed his father footsteps into the force and has just retired.

“I’ve been to as many of these as I can,” Bobbie said, “and today I’ve brought along Terry’s long service medal, which I was presented with when Mark got his.

“We always have a memorial day for him, but today has been very special.

“I’m very proud. Terry was doing a job he loved, and it’s always been a part of our lives.”

The names of those officers who had died in the past year were read out during the moving service.

HRH The Prince of Wales, who is patron of NPMD, said the country was ‘forever grateful for the steadfast dedication to duty of our police officers who have adapted and worked so tirelessly amidst the ever-changing circumstances’ of the COVID-19 pandemic.

Writing in the commemorative brochure, Prince Charles said: “We owe a most profound debt of gratitude to our police service and its remarkable officers, who, along with their families, will continue to have a very special place in the heart of our nation.”

Representing Wales was Rhianydd Gardiner, great-niece of PC Noel Alexander, who died in 1964 because of injuries sustained in a training incident.

“Today, we pay tribute to the courage of those killed in service, and the great courage showed by their families ever since.