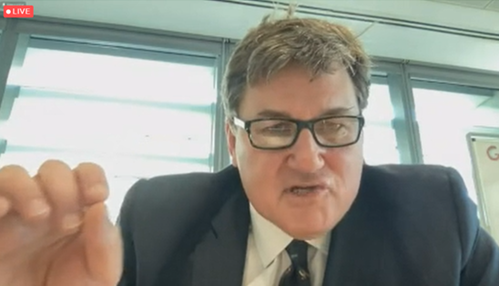 The pressure police officers were under trying to keep the public safe – and the challenges the constant changes to Covid-19 laws and legislation - came under the microscope at the 2021 Police Federation of England and Wales Virtual Annual Conference.

“In the early days [of the pandemic] things moved so quickly that perhaps communication could and should have been better," Policing Minister Kit Malthouse admitted.

Mr Malthouse said: “There were areas of grey that needed co-operation between the police and the public to get through it.”

But he added that he hoped officers felt they had the support of the Government, saying: “We did what we could to support policing and ensure police on the frontline were as clear as they could be.”

Sir Thomas Winsor, HM Chief Inspector of Constabulary, said he would give the Government “nine out of 10” for how they had handled policing over the past year, but that they lost marks for the many changes in regulations.

Mr Malthouse was also grilled about the failure to get police officers prioritised for COVID-19 vaccinations. He said: “We pushed hard, both the Home Secretary and I, to recognise the police as a group for priority vaccination, but the JCVI [Joint Committee on Vaccination and Immunisation] decided that it wanted to maintain a policy that the risk of death and serious illness should the priority instead of the risk of catching it.”

Mr Malthouse later said he could “see the logic” in the JCVI’s decision, but that he also saw the logic in the police’s case.

He added: “It’s a point of regret that we didn’t manage to make our point strongly enough.”

On the issue of public confidence in policing, Mr Malthouse said he thought “support from the public is strong” and “policing is coming out of the pandemic in better shape than it went in”.

But Shadow Policing Minister Sarah Jones pointed out that there were an increasing number of assaults on police officers and that “police are facing a very difficult environment”. She mentioned the historic cuts to police numbers, the changing nature of crime, the pay freeze and of course the challenges of having to police COVID restrictions.

She said: "Let's not pretend that there's not a huge amount of pressure that police officers are under."