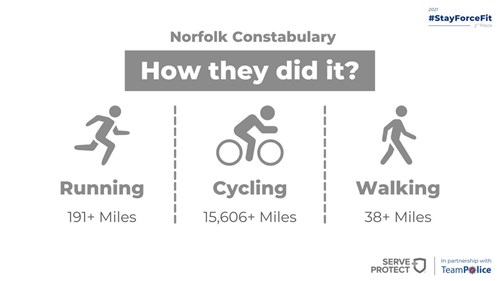 Congratulations to Norfolk Constabulary who took home 2nd place in the Serve & Protect Police Credit Union competition #StayForceFit
Norfolk Police Federation Chair Andy Symonds, along with a team of Norfolk officers took part in the #StayForceFit challenge and managed to clock up an amazing 15,835 miles of either walking, running or cycling.
Andy said “Throughout February, The Peelers Cycle Club and Norfolk Harriers Running club participated in the challenge, competing against other forces to submit the most miles (mostly on indoor turbo trainers by the cyclists so no excessive distances were cycled in the community due to COVID), and collectively we racked up 15,835 miles which is extraordinary.”
In the process of doing so, Norfolk Constabulary came 2nd in the event run by the Serve & Protect Police Credit Union, and have won £250 for the force benevolent fund which Andy said ‘can only be good news.’
1st place went to South Wales who racked up an amazing 34,484 miles getting £1000 for their force benevolent fund and 3rd place went to Dyfed-Powys with 5,400 miles.
Andy added “Taking into account that as a force with 1,650 officers compared to South Wales who have over 3,000 officers we punched well above our weight.
“One officer Supt Lou Provart managed to rack up an astounding 1000 miles alone!!
“I must say that this event really helped my personal physical and mental health and I felt motivated during this competition and has propelled me to do more since the competition has ended. I know many others feel the same.”
Well done to all involved!