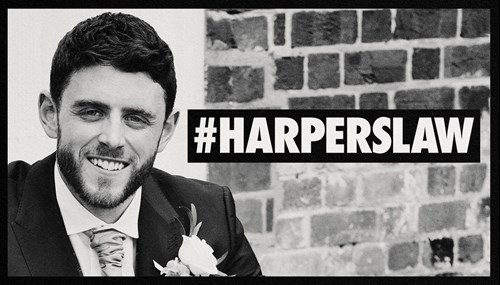 “Harper’s Law is a campaign that I know all of my members here in Norfolk fully support.”

So says Norfolk Police Federation Chairman Andy Symonds on the campaign led by PC Andrew Harper’s widow Lissie, which is pushing for life sentences for those who kill emergency services workers.

Thames Valley Police officer Andrew Harper was killed in August last year by Henry Long, Albert Bowers and Jessie Cole, who were convicted of manslaughter, but cleared of murder. Long was given a 16-year sentence and Bowers and Coles received 13 years; their sentences are now being reviewed by the Court of Appeal.

Andy said: “Harper’s Law is a campaign that I know all of my members here in Norfolk fully support. The brutal killing of PC Andrew Harper on the night of 15 August 2019 will never be forgotten by police officers up and down this country.

“My prayers and best wishes go to Lissie, Andrew’s widow, who has shown great dignity throughout what must have been a truly terrible time for her and the family.

“I take my hat off to Lissie who, in the midst of grieving for her husband, has started the Harper’s Law campaign, which is backed by everyone in the Police Federation.”

Andy continued: “We see all too often the lenient sentences handed down to violent criminals hell-bent on causing serious injuries and even killing police officers. It must become a guaranteed life sentence for someone who kills a police officer acting in the execution of their duty. Nothing else will suffice.

“Officers put their lives on the line to protect society, therefore society must step up to the plate and protect officers by handing down the ultimate sentence to those who kill police officers.”

Lissie’s campaign is being supported by the Police Federation of England and Wales. She is currently meeting with MPs and hopes to speak to Home Secretary Priti Patel.

Lissie said: “Our justice system is broken. And we need Harper’s Law to help fix it. I have witnessed first-hand the lenient and insufficient way in which the justice system deals with criminals who take the lives of our emergency workers.

“Sadly nothing I do will bring Andrew back – but I know he would be proud of me for seeking to bring about a law change, which will hopefully act as a deterrent to anyone considering doing to one of his fellow emergency service workers the terrible thing that happened to him.

“Harper’s Law will ensure those that commit these offences aren’t out again on the streets in a matter of weeks, while the families of the victims suffer their own life sentences. That would be far more just.”

Lissie is asking the public to sign and share the petition: change.org/HarpersLaw, use the hashtag #HarpersLaw and lobby their local MPs.