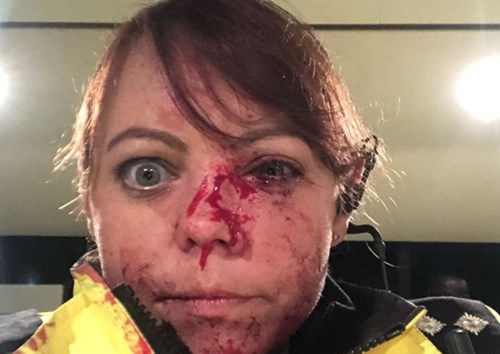 A police officer has vowed to “continue running towards the danger” despite receiving these horrific injuries in a brutal attack while on duty in Norwich city centre.

Her attacker Shannon Lovelock has now now started a four-year jail term after he caused injury to three officers, including Inspector Laura Symonds, who suffered a fractured eye socket and broken nose in the incident.

Inspector Symonds, who suffered permanent damage to her vision, spoke exclusively to this paper about the attack saying that while she vowed to continue as an officer, it had impacted both her and her friends and family.

The officer of 11 years said: “They’ve questioned whether the job is worth it. I’ve reassured them it’s my passion and that every day my instinct is to run towards the danger when others are running away.

“My colleagues do it and I want to lead by example and show them can still do it.”

"A totally unprovoked attack which ended with serious injuries being inflicted. Sadly this has become an all too regular occurrence with officers being assaulted and left with injuries that cause them pain and issues long after the incident.

"I’m seeing an increasing number of officers who unfortunately are having to be placed on restricted duties for long periods of time or even retired due to the injuries they’ve sustained from being attacked.

"These are officers who can no longer be on the frontline of serving the community. It impacts us all.

"At what point do we start seeing the support from the courts when they hand down the sentences to those who attack my colleagues. At the moment we do not see consistent deterrent sentences handed down. This has to change. I can guarantee that if a judge or magistrate were assaulted while at work the offender would be given an immediate custodial sentence.

"Officers are human beings that happen to wear a uniform and work in a profession they see as a vocation rather than a job. They are brave people who put themselves in harms way to protect the community they serve.

"Even after being viciously attacked Insp Symonds would continue to run towards danger to deal with whatever confronted her. This is the same bravery, passion and commitment shown by all officers.

"But we must not underestimate the impact of these assaults both mentally and physically. They take their toll during a long career which will inevitably mean officers are on the end of assaults many times."