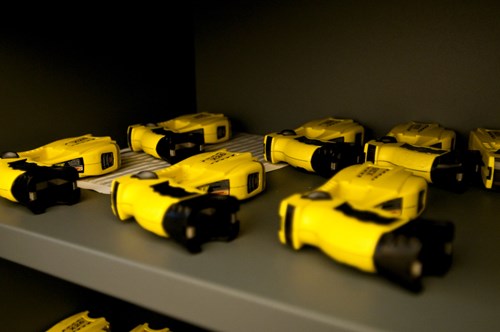 The Chairman of Norfolk Police Federation is pleased that the Home Office has funded an extra 132 Tasers for Norfolk Police officers, saying it will help keep officers and the public safe.

Norfolk Police Federation Chairman Andy Symonds said: “I’m pleased by this news. This bit of equipment does and will continue to save officers from serious injury.

“It gives officers another option when confronted with violent suspects that need to be arrested as safely as possible. My colleagues work in vast swathes of countryside and their nearest back-up can be many miles away.”

Andy added: “This comes after a commitment from our Chief that by 2021, all frontline response officers that want to trained in Taser will be given the opportunity. This extra funding for an additional 132 Tasers will mean that more officers will be able to access a Taser and use their training in order to keep themselves safe and the public.

“I have seen countless Body Worn Videos of officers confronted with violent suspects who are carrying either a weapon or a knife.

“These implements can and do kill and cause serious injuries. Taser, in all of the clips I’ve seen, has been deployed effectively and brought these serious incidents to a safe conclusion for all.”

All but two of the 43 forces in England and Wales submitted requests for extra funding. Part of the national £10m crime-fighting fund will be spent on tackling serious violence and county lines drug gangs.

He said: “I have campaigned for ring-fenced funding for more colleagues to have access to Taser, and it’s refreshing that the Home Secretary has listened and acted.

“Because of our lobbying there will be almost 8,000 more Tasers available for my colleagues, this can only be a good thing.

“This was a unique opportunity for forces to secure extra protections without shouldering the majority of the cost. I would have liked to have seen every penny of the £10m funding used to fund more Tasers.

“At a time when officer safety is dominating the headlines, I am surprised that some forces chose not to take advantage of this extra funding.”