PC Frances Peters was named as the Region 4 (Eastern) winner at the 23rd national Police Bravery Awards in London on 12 July, hosted by the Police Federation of England and Wales.  The awards, sponsored by Police Mutual, honour and recognise police officers who perform outstanding acts of bravery.

PC Peters was the first officer on the scene after police received a late night call from a man claiming he was going to kill his wife. She arrived at the remote farmhouse to find a man in the kitchen, playing music and talking to himself while fiddling with a mobile phone. PC Peters tried to talk to him, but he didn’t acknowledge her presence and turned away.

She realised he’d picked up a sword in each hand and was coming towards her. PC Peters used her Pava spray and personal safety skills to restrain her attacker and safely handcuff him until other officers arrived to take him into custody. 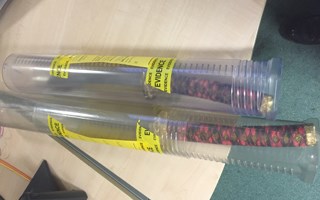 When asked what went through her mind when someone came at her with a sword, PC Peters said: "A bit of disbelief, oh no I’m on my own what am I going to do – it was a bit of a heart stopping moment. You don’t know what you can do until you are in the situation. You just get on with it. I still go into work and do what I normally do.

"It’s been a fantastic day and to get to go to Downing Street was a once in a lifetime event."

Andy Symonds, Chair of the Police Federation of England and Wales, said: “The courage and professionalism shown by PC Peters went above and beyond the normal call of duty. She showed exceptional bravery, and thoroughly deserves to win this award. I thank PC Peters, for her dedication in helping to keep the public safe”.

Stephen Mann, CEO of Police Mutual, said: “Over the last 10 years, Police Mutual has been proud to have sponsored such an inspirational event in the policing calendar and for my colleagues and I to be able to show our respect for the exceptional courage shown by police officers who risk their lives every day to protect the public and keep us safe."