I am one of the many officers who were either on the 1987 or 2006 scheme and moved over to the 2015 CARE scheme on the 1st April 2015 as I was too young and was not close enough to retirement to be included in the tapered/transitional protections. In fact as you know the tapered/transitional protections have now been deemed discriminatory to officers like me and you and many others.

However it is my own opinion that the Government will fight against all public sector workers from returning to their original schemes. For us this would be the 1987 and 2006 schemes. The Government have showed they will fight all the way through to the highest court in the land. However this should not stop us from fighting for what I beleive is fair and for officers to be returned to their respective schemes.

The FBU have won the case on the matter of the transitional protections being discriminatory which is a top result and I wanted the FED to take the line the FBU did and fight like they did as we wouldn’t have ended up in being rightly criticised as we are now. However the national FED received Queens Council legal advice as did many of the other public sector unions which stated it was unlikely to succeed.

I'm glad this legal advice has been proved wrong. However this has bitten us on the behind and rightly officers who have been negatively impacted/discriminated against are asking questions over what the FED will do now.

The national FED have stated that they will fight for all officers who moved onto the 2015 scheme in April 2015 or later depending on when their transitional protections ended. The fight will be to get all officers placed back on their pension scheme, either the 87 or 06 scheme. Officers who did get transitional protections were given varying lengths of protection but the maximum officers received was to the year 2022.

Therefore the FED nationally decided that they would fight (legally if required) for the Government to place all officers back onto their original schemes until 2022. Then inevitably move onto the CARE scheme from 2022 onwards.

At the moment we have no idea what the Government will decide to do with the issue but they have said they will make a statement before the recess for the summer. This will give us a guide as to what they will do.

The Cops Against campaign which has around 14000 officers registered for taking legal action against the Government, want the FED to fight for full reversion to our original pensions which is the fairest way to deal with the pensions issue. This is exactly what the Labour Government did in 2006 when they introduced the 2006 pension scheme. Everyone joining the service after 1st April 2006 would join the new scheme.

I’ve attached a Twitter post (below) from @CopsAgainst who seem to be stating the same thing the national FED are now doing. 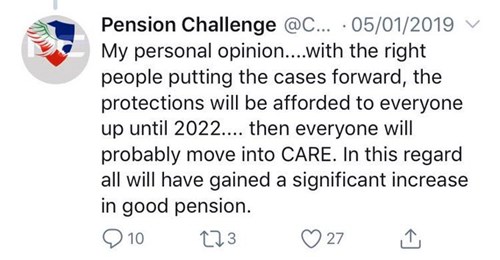 It’s a terrible situation and we’ve (along with nurses, teachers, firefighters, doctors etc) have had our pension stolen. My understanding is that legally the Government do not have to put us back on these schemes and in my view will do the absolute minimum to comply with the legal judgement by the supreme court ruling on the discrimination element of the transitional protections.

I will be fighting (along with other local branches of the Fed) for the national Fed to fight for a return to our original pensions.

As always happy to talk. All the best.