Harrowing stories of police bravery in the face of extreme danger will be told in the third episode of a new documentary series on Monday (13 May 2019).
Police Code Zero: Officer Under Attack has been produced by REEF TV in collaboration with the Police Federation of England and Wales (PFEW) and uses bodycam footage, CCTV and first-hand accounts reveal how far suspects will go to try to escape justice.

The third episode of the four-part series will be broadcast on Channel 5 at 10pm on Monday 13th May. Click the link to Channel 5's website for the full article 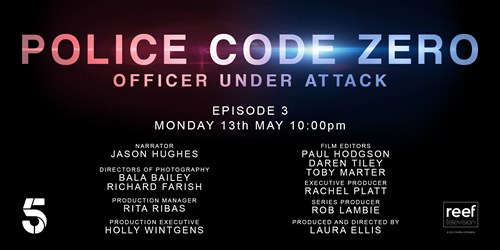 Andy Symonds, Chair of the Norfolk Police Federation said: "I managed to get a volunteer to appear in front of the camera. So this episode will feature our very own Pc Ollie Gilder from Kings Lynn. It shows his story of an unprovocked attack which could have had more serious conseqeunces". Andy continued, I hope that the series will show the voilence that is regualry being shown and perputrated against our officers. The new law that we campaigned for under the #Protect the Protectors banner was introduced in November last year which increased the sentencing powers from 6 to 12 months under 'Assaulting Emergency Service Worker'.