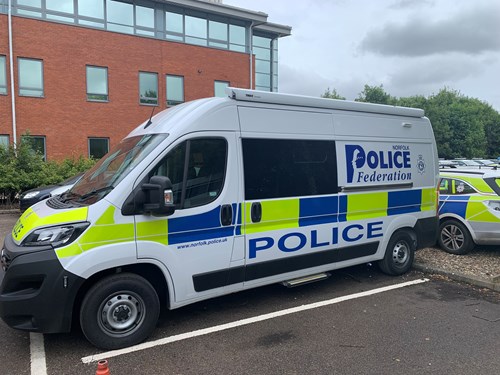 A new welfare van will provide hard-working Norfolk Police officers and staff with a much-needed space to rest and refuel when they’re policing major incidents.

Norfolk Police Federation Chair Andy Symonds started the project two years ago, as he saw the benefits a welfare van would bring to members.

Over the past few weeks the brand-new air-conditioned Fiat Ducato van has toured stations around the county to great success.

Andy said: “I’m biased, but I think we’ve got the best one in the country. We’ve already deployed it to a couple of recent policing events and it’s gone down a storm, with really great feedback. Officers were impressed.”

The van contains a microwave, fridge, sink and boiling water dispenser. The rear has a toilet, hand-washing facilities and storage, while the rest of the van has room to seat up to six officers, along with three in the front.

The cabin contains comfy chairs and table, there is an awning to provide shelter, and the van will be stocked with hot and cold drinks.

The van will be deployed at certain crime scenes and pre-planned policing operations.

Andy continued: “It’s important for when officers are out at a scene where they can’t easily get back to a station. They might have to stand there for hours on end in inclement weather, or too hot weather, so they’ll have somewhere they can go to seek shelter, warm up or cool down, get off their feet, relax and take a cup of tea or coffee, use the toilet and get back out. It will make a world of difference.

“Our view is the force should have been doing this years ago, and they do have some static bits of kit but they are cumbersome and take a few days to get organised. This van is going to be super-quick, it can be deployed anywhere and everywhere and it will enable cops to take a well-earned breather.”

The van was paid for by both Norfolk Police Federation and the Police and Crime Commissioner and it will be maintained and resourced by the force. Officers will be able to request deployment via the control room.
Andy hopes its introduction will encourage the force to finance further vans once they realise what an important resource it is.

He added: ‘“It is new, super duper and ready and raring to go. It’s really exciting and it will be good for cops. When you look at other emergency services – particularly the fire service, which has had welfare units like this for many years – you realise we didn’t have anything similar and it’s a bit embarrassing.

“Finally we are catching up. I see this as a forerunner for the force to realise that these are invaluable bits of kit that will help with officer welfare.”

He said the idea of a welfare van to support officers in demanding situations made “great sense”.

He added: “I was an impatient Police and Crime Commissioner – impatient to improve the safety, welfare and wellbeing of Norfolk’s police family.

“The women and men of the Norfolk Constabulary leave home daily ready to place themselves in harm’s way to keep us safe. We own them a great debt.”

Norfolk Police Federation Chair Andy Symonds invited the then-PCC to a Federation meeting, where the subject of the welfare van was brought up.

Mr Green explained: “Discussion turned to the prospect of a Norfolk Welfare Van to support officers in demanding situations out in the community facing long and possibly cold hours attending accident or possible crime scenes. Officers in such situations shouldn’t have to go behind a bush to answer nature’s call.

“The possibility of a hot drink should be at hand. But the question arose where the funds would come from to buy and equip a van. And this was only one of the many potential roadblocks – where would the van be stationed, who would operate it etc.

“It was obvious to me that the idea made great sense. I said that the cost should not be a deal breaker – I would assure partial funding if the other issues could be resolved, and I encouraged senior management to clear the administrative roadblocks.

“My preoccupation with police welfare was not limited to the men and women of the Constabulary. I tried my best to stimulate a fund to support the fantastic canine corps, animals and their families, when the dogs were retired. Here too I ran out of time.

“Norfolk Constabulary is well served by a committed and officer welfare focused Federation under the leadership of Andy Symonds.

“Why don’t we have an annual countywide Norfolk Emergency Workers Appreciation Day? I’m still impatient to see the safety, welfare and wellbeing of the Norfolk Police family, present and past serving officers, staff, and their families receive the respect and recognition for all they do to keep our county safe.”