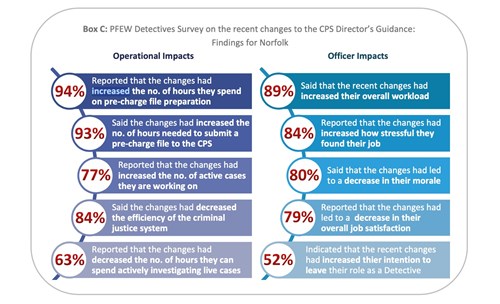 New disclosure rules are heaping stress onto already overworked detectives and leading them to consider leaving the service, a new survey has found.

A study carried out by the Police Federation of England and Wales (PFEW) on behalf of the Federation’s National Detectives’ Forum found that a staggering 89% of detectives in Norfolk said the changes had added to their workload.

The new rules introduced last year by the Director of Public Prosecutions require detectives to provide the CPS with trial-ready prosecution before it makes a charging decision.

In Norfolk, 84% said the changes had increased how stressful they found their job, and 80% said it had led to a decrease in their morale.

And 79% of respondents from Norfolk said the changes had led to a decrease in their overall job satisfaction, with 52% saying it had increased their intention to leave their role as a detective.

Norfolk Police Federation Chairman Andy Symonds said being a detective has changed from being a sought-after job to a role nobody now wants.

They likened the changes to amounting to a stealth tax on policing – as detectives are having to spend far longer sitting at their desks file-building, rather than engaging with their victims and investigating crimes as the public would want.

Andy said: “I’m extremely worried about the impact of these new rules on our members and colleagues. It’s been a year since they were introduced, and our survey shows just how much they’re adding to the workload and stress loads of detectives – and affecting their ability to do their jobs.

“We must improve the situation as we’re struggling to recruit detectives – and one of the reasons is these rules. A move to being a detective was seen as something many officers aspired to achieving and it now appears to be a role officers do not want.

“We’ve shared the findings with our senior officers and in with our local politicians because something needs to be done. I have also spoken with the PCC here in Norfolk and I know he is raising this issue with Government.

“There’s a shortage of detectives, meaning that the investigators we do have were already placed under workload, time and demand pressures before these changes came along.

“Now it’s even worse, with a lot of time spent on reviewing and redacting statements and videos.

“And it can be a waste of resources if, say, a suspect admits to an office or prosecutors decide to drop the case.

“So it’s no surprise that our investigation found stress levels rising, morale falling and more detectives thinking about leaving their roles.