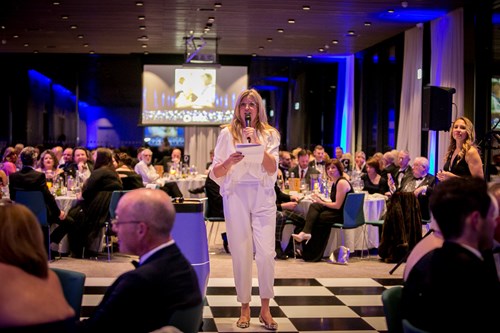 A night of unrivalled glitz and glamour hosted by tv presenter and special constable Penny Lancaster has helped raise more than £30,000 for Care of Police Survivors (COPS).

The Winter Ball raises money for COPS, the only charity in the UK solely dedicated to supporting the families of police officers and staff who die on duty.

COPS patron Penny stunned the room by offering a money can’t buy VIP experience to meet her music legend husband Rod Stewart and attend one of his shows later this year.

She said: “I’m really pleased the auction, including my surprise lot, went well and helped raise so much money - COPS is a charity that is close to my heart, so it was an honour to help.”

The unexpected auction lot saw a bidding war erupt among guests and was eventually won by a determined Mark Hyde from local company Hyde Engineering who admitted he was a fan of the rocker, but wanted to support the charity.

Penny, a special constable with the City of London Police, added: “The COPS Winter Ball is always a fantastic evening. Everyone attending is here to help and have a good time, and I think that’s what people need right now. It was lovely to see so many nice people enjoying a fabulous evening out.”

As well as a lively auction guests enjoyed an extravagant prize draw and were greeted at the entrance by the flashing lights of the COPS car, a genuine US police car donated to the charity to help raise funds– a popular backdrop for photos and selfies.

Guests were also able to take in The Beat, the avenue of trees at the arboretum dedicated to fallen officers from each police force in the UK, which was lit blue in a stunning and poignant display.

COPS national president Gill Marshall said the ball was a huge success: “It’s been two years since we last held a Winter Ball so it’s great to get back together and celebrate the amazing work of COPS. But not only that, it’s great to raise the profile of the charity as well as raise funds to allow us to continue to support the families of fallen police officers.”