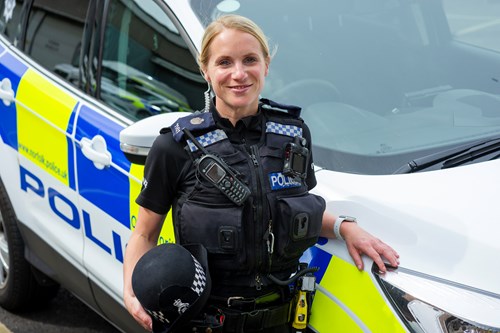 Two Norfolk Police officers who detained a pair of violent offenders wanted for threatening murder and blackmail have been nominated for The National Police Bravery Awards.

PC Katie Swann and PC Marley-Jay Symonds – who has asked not to be pictured for operational reasons - will join colleagues from across England and Wales at the prestigious event in London.

It was back in the early evening of 15 January 2019, when Norfolk Police officers had been dispatched to the village of Ormesby in following reports that an armed man was making threats to kill and blackmail people.

The man had left the scene once the officers arrived.

In the meantime, PCs Swann and Symonds went to the address of the offender’s mother where they found him and another wanted suspect.

Seeing the officers arrive, the pair become very aggressive and started to resist the officers’ attempts to detain them.

PC Symonds tried to make an arrest but could hear that the other suspect was continuing to aggressively struggle with PC Swann.

PC Symonds dragged his suspect into the kitchen so he could aid PC Swann, but the man started to punch him, and PC Symonds had to use PAVA to get him under control.

PC Swann had managed to get one handcuff on her suspect in the struggle, and despite having partial control of him, he continued to be aggressive even after PC Symonds administered another dose of PAVA spray.

It gave enough time for PC Swann to use her Taser on the man, but it needed the help of further colleagues who had now arrived at the scene to get him finally subdued.

One of the offenders was jailed for 26 weeks, while the other was fined.

Norfolk Police Federation Secretary Sam Hawkins said the officers had had to demonstrate real teamwork to get the situation under control.

“These men were big burly violent offenders, so PC Swann and Symonds had to think on their feet and help each other out to get the job done,” she said.

“The fact that the suspects carried on struggling despite having PAVA and Taser deployed on them shows just how severe and violent this incident was.

“It was great police work, so our congratulations go to both officers for the bravery they have shown. They fully deserve this nomination.”

As nominees, PC Swann and PC Symonds will attend a prestigious daytime reception and evening awards ceremony in London in July 2021. The 2020 event – the 25th National Police Bravery Awards - had been scheduled to take place this past summer but had to be cancelled due to Coronavirus.

“PC Swann and PC Symonds are fantastic colleagues. Officers never know what they will encounter when the call comes in – they just need to be ready and prepared. These officers dealt superbly with what was put in front of them. We are very proud of them.