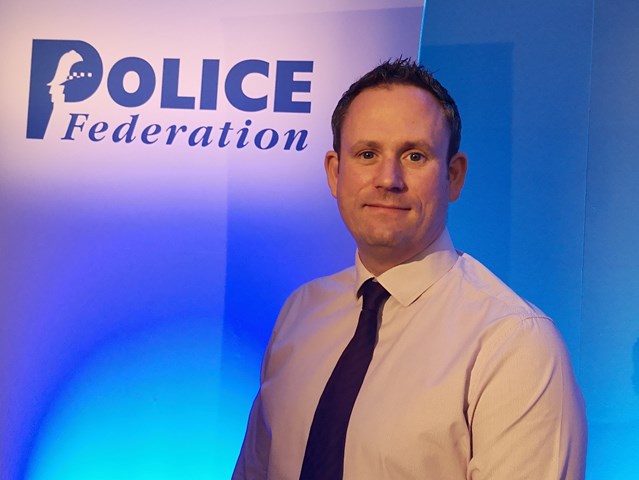 Having a PIP in place means officers can get the welfare and legal support they need, he said at this year’s PFEW PIP Seminar in Warwickshire.

He explained: “It’s really important because it’s a big event in their policing career where they need to be properly supported for one, to give their evidence properly, and two, for their welfare as well.

“Many post-incidents I’ve done you realise how under pressure and how worried and fearful and anxious the officers are when they come into the post-incident suite.

“So it’s really important that we grab hold of the situation and as a Federation make sure that the process is done correctly. It’s done with their welfare at heart, and done openly and transparently for the process as well. It’s so important because they need us in their hour of need."

He added that taking care with the first post-incident statement is important, as is giving officers the chance to take their minds on what can be extremely traumatic incidents.

Andy said: “In the PIP suite, it’s making sure that officers have got access to legal support which is really important because that first ink you put on the paper is making sure that that evidence is done with the right help and support, particularly if there’s been a death, to make sure it’s done coherently and correctly.

“The second part is officers’ welfare; making sure they’ve got access to phone calls to family worried about them as they might be late off duty.

“We’ll make sure they are fed and looked after. Part of our PIM suite at the Fed office has a breakout room with access to Netflix, meaning they can take their mind off things once they’ve done the hard work of putting pen to paper: it completely takes them away from the situation they’re in.

“We then make sure that some of the requests coming in from the investigating officer aren’t against the APP [procedure] and making sure that the requests are reasonable and fair.”

Andy also said that it is important to remember that first and foremost, officers are witnesses.

He added: “It’s a process that helps witnesses and we have to understand that officers who are involved in a post-incident are witnesses. They’re not subjects of the investigation.

“It’s making sure that we, as the Federation, facilitate an open and transparent investigation - as well as the post-incident manager who will be there as well.

“That has to be done by either the PSD, the local investigation, or done by the IOPC. We facilitate that and make sure that officers can put their best foot forward in giving evidence.

“It’s important for the family who has had maybe a death following police contact or a serious injury, that they are confident as that our processes are open, transparent and deliver a full account of exactly what happened in the lead-up to the death or serious injury.”

Ensuring everything is kept open and transparent is vital in the immediate aftermath of an incident, right down to making sure body worn video is on and running, Andy said.

He explained: “If officers have been involved in a post-incident and death or serious injury then it’s really important they have the knowledge to actually challenge if there is going to be a PIP called, and making sure that they don’t confer, they don’t have a chat with their colleagues about what happened and their honestly held belief.

“It’s making sure they know to keep their body-worn video on and to keep it running until they arrive at the PIM suite.

“That’s when we wrap around as a Federation to really offer them that support. When that initially happens it’s important that they don’t put pen to paper because they need time for their brain to go through and make sure that first account is given properly and under the proper processes.”

This year’s PIP seminar focused on getting ‘Back to Basics’ and agenda topics included Novichok – the aftermath; the impact of lengthy IOPC investigations; deaths in custody; and the Sean Rigg case, in which a group of Met officers were dragged through a 11-year long IOPC case.

Andy concluded: “Things are slowly getting better with the IOPC, but it’s still not there and it’s a very frustrating wait for officers when they’ve been involved in something so serious.

“The family of someone that’s been involved, who’s got a serious injury or death, they want a reasonably quick resolution as well and want it investigated properly.

“We don’t want it done quickly and things not done properly, what we want is an investigation that’s done proportionately and professionally as well. We’re pushing that in the Federation to make sure that’s done and for time limits as well.”