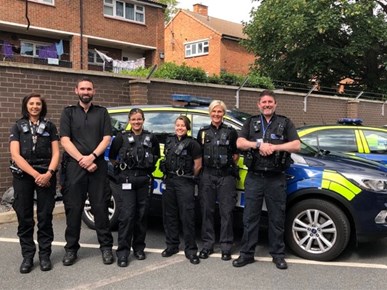 He shares his thoughts…

“I’m really pleased that I’ve been able to get out during Response Policing Week just as I did last year. I’ll always be a response officer through and through, it’s a job I loved doing and is still close to my heart.

“Yesterday I got the chance to see response policing from a different side, as I went out with our very own Vice chair, and response Inspector, Nadia Rana. I also took our medical scheme manager, Kerry Meuldyk, along as she was keen to see what our colleagues deal with every day.

“Our day started early at 6.30am where I spoke to the night cover Inspector. She had done a double shift so that a poorly colleague could go home, but nevertheless greeted us with a smile and offer of a drink.

“Once Nadia arrived we listened to the handover which included updates on live incidents, the number of outstanding jobs and how many deployable officers there were on response.

"We left for a bit to go and do a core task – the clean of the car and checks of all the kit (plus a trip to Sainsbury’s for a few boxes of donuts!).

“We then collected Nadia and headed off to Loughborough. I got to show Kerry the excellent new kit in Loughborough’s gym, which the Medical Scheme have sponsored, as well as a look around the station before a catch up with Sgt Shauna Ashton. Shauna is the new deputy NPA Commander and her love of the role was clear to see – she has been ruthless since she landed at Loughborough, the station is looking very smart with some more plans to alter the layout of the office.

“While we were going through the demand level we had to leave for an incident out in Dadlington. Once that was dealt with, we went to check in with officers monitoring an incident in Braunstone before heading off to Keyham.

“We dropped off some donuts but didn’t stay long as there were two jobs stacked for us in quick succession. We managed to hand over another box of donuts to a very grateful shift before going to the next incident. Due to how sensitive that was we stayed outside but some of the pupils of Spinney Hill Primary school were desperate to have a look at the police car and a couple of photos as well.

“I said goodbye to Nadia at HQ as she left to write up all of the incidents we had attended.

“It has been a fantastic day, not just seeing response policing from another side, but also sharing it with Kerry who got to ride along and see & hear the types of incidents our colleagues are going to every day.

“Demand for our services is only going up which puts a huge strain on our frontline. Yes we have had a much needed staffing uplift, but we need more if we are going to keep on top of demand. At two incidents we attended the entire shift were required (4 of them) to complete the numerous enquiries at the scene.

“They do all this as well as managing their ongoing enquiries, emergencies, missing people, mental health incidents, people in custody, the list is endless. I saw how the staff at Loughborough have their hands tied with a number of vehicles off the road that need repairs. I saw colleagues dealing with traumatic incidents all day, and the support offered to them by supervising officers.

“The Government think you can do more with less – when it comes to policing that is simply not true.

“I was a little late off this afternoon, but it’s nothing compared to how late some of my colleagues will be as they diligently spend time recording their days work and safeguarding those who need it. Taking us back to the staffing levels of 2010 is not enough, because the population and demand profile have changed so much. We need more officers, and that means a well-funded police service with the financial package to tempt and retain the next generation of respon