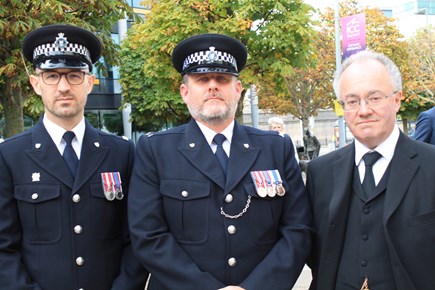 Chair Adam Commons said Mr Cole was always in their thoughts as he attended the service in Belfast on 25 September.

Adam said: “This year, of course, is the first one we are doing without Simon. My first memorial day last year was with him, so of course this is bringing back memories of my time with him and that is difficult. He is always at the forefront of our thoughts, as are his family, and we’ll remember him today.”

Adam said he felt very proud to attend the service and to honour the lives of the Leicestershire officers who have been lost, along with the wider police family.

He added: “This event has huge significance within the policing calendar. When you look at the history of the police, there are 4,000 officers who have died in the line of duty since the first salaried constables were created in 1792. It was right that we started to remember them.

“It took a long time to get this day when it started back in 2000. But now it is a big day in the policing calendar. It’s good that we all come together like this to remember those people. And it needs to continue in the way that we’re doing it, the way that we’re moving it around the country, and give everybody that chance to remember.

“It makes you remember why you stood up and took the oath in the first place. It really is a very poignant and thought-provoking day.”

Officers joined the Home Secretary and police chiefs, families, friends and former colleagues of the fallen at Waterfront Hall to pay tribute to officers’ commitment, courage and sacrifice.

Members of the Royal family, who would normally attend, were absent as they are still in mourning for HM Queen Elizabeth II.

The names of officers who lost their lives over the past year were read out at the event by Liam Kelly, chair of the Police Federation of Northern Ireland. They are: PC Daniel Golding, of the Met; PC Craig Higgins, of Greater Manchester Police; PC Alex Prentice, of Northamptonshire Police, and PC Darryl Street, of the Civil Nuclear Constabulary.

Home Secretary Suella Braverman, who gave a reading during the service, said: “To all the officers who lost their lives while working to keep us safe, we thank you and we honour you.

“Their bravery and commitment to their duty was unfaltering – society owes them and their loved ones a debt we cannot repay, but it is one we will not forget.

“As Home Secretary I make a promise to give police the powers and tools they need to do their jobs safely.”

During the service, candles were lit by relatives in remembrance of officers throughout the country who have lost their lives – one from each of the four nations of the UK.