We have partnered up with Limitless Float to offer our members an exclusive 10% discount.

Floatation reduces distraction, by creating a safe environment cut off from the world where it is otherwise difficult to find refuge. This creates a deep relaxation that can't be found anywhere else but in the float tank. With 90% of gravity off your body and very little sensory input, your body is able to decrease the release of cortisol (stress hormone) and lower blood pressure which is linked to elevated stress and increased risk for chronic illnesses and depression. The deep meditative state achieved during floatation therapy is a suggested reason for this increased level of happiness which elevate levels of dopamine and endorphins. A recent study showed these effects were apparent after a single, one hour float and, in anxiety, even rivalled the use of prescription medication (1). These benefits also last past the float sessions with increased use, up to six months later according to a study conducted in 2016. (2). Although there are limited studies on flotation therapy for the direct treatment of PTSD, the most recent in 2018 (1) showed a decrease in symptoms. There are multiple studies (3,4) which have shown that meditation practice, float tanks providing the ultimate environment for, combined with traditional therapy can improve the severity of PTSD symptoms. Due to quiet nature of the tank it prevents sudden attacks of fear and subsequent reactions related to noise and allows the mind to feel rested and calm. 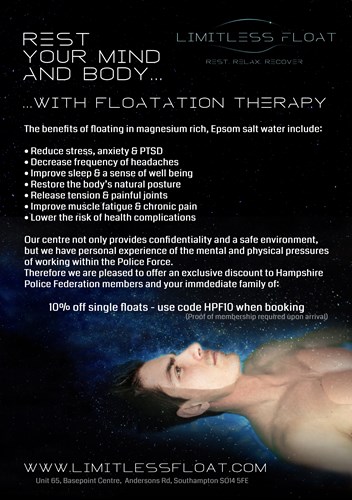