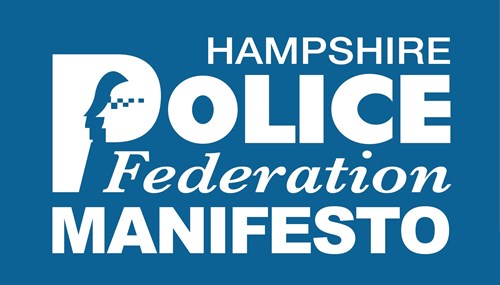 Hampshire Police Federation has published its 2021 Police Manifesto, which it will be sending to all prospective Police and Crime Commissioners ahead of the scheduled elections this year.

The Federation will be looking for whoever is elected to honour and push for these points in their time in office.

Fair Share of Funding for Hampshire and the Isle of Wight – Hampshire Police receives £43.5 million less funding per head of population compared to the average of all forces. We need more investment in Hampshire Policing which will mean more officers to manage the increasing demand across the board in Policing. Policing is currently going through a 20,000 officer uplift in England and Wales but as things stand Hampshire Police has some 700 fewer officers than we did in 2010. And it’s the public that suffer as a result.

Assaults on Officers – We Must Protect The Protectors.  Clear deterrents need to be given when people assault Police Officers and fellow Emergency Service workers. The law has been strengthened and we have the Assaults on Emergency Service Workers legislation, but we still see often weak and sometimes inconsistent sentences and officers feel let down. On average three police officers are assaulted every day in Hampshire and these numbers are on the rise. We call upon all parties to ensure minimum sentencing for assaulting a 999 worker. And that those sentences are consistently applied as an effective deterrent.

Pay and Morale – Police officers have already been told their pay is going to be frozen in 2021. Essentially taking money from some of the brave people who have been at risk and severely stretched during the Covid-19 pandemic. It will not assist with motivation. The latest Federation Pay and Morale survey showed 61% of Hampshire Constabulary respondents felt they were worse off financially than five years ago and 39% of respondents said their morale is currently low. Politicians of all parties need to join with us in fighting the cause of police officers with National Politicians for better police pay and morale.

Police Officer Wellbeing – During their careers, each police officer is likely to encounter between 400 to 600 traumatic events. Most citizens experience three or four in their lifetime. Police officers are not robots and the things they see and experience – made worse by Covid-19 – cannot be underestimated. More than 230 colleagues took time off for stress, anxiety, depression and PTSD last year. Hampshire Police Federation offers our members excellent wellbeing support but we and they need more. The promised Police Covenant is a good start but policing is making people suffer from mental ill health and it should be a joint effort from Government, Forces and PCCs to offer those officers improved wellbeing support.

Cost of Living – To get the best and broadest range of police officers, we need to recognise that it costs a lot more to live in Hampshire. To address the costs of living in this area, Hampshire Police officers currently receive a £1,100 South East Regional Allowance annually but that could be as much as £2,000. Other police colleagues across the South East – undertaking the same role – receive more. We think there should be an uplift in Hampshire to recognise the cost of living in our area and then in the future it should rise linked to inflation and be brought in line with London allowances.