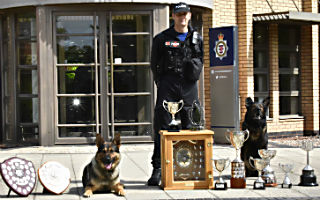 An Avon and Somerset officer has made history by becoming the first to win the National Police Dog Trials title twice.

Dog handler, PC Nick Dalrymple, stormed to victory with Ash, to equal an success when he previously triumphed with PD Aden, now retired, in 2013.

Gwent Police hosted the three-day event at Tredegar House, Newport. Dogs and handlers from 18 UK police forces competed for the title in a tightly-fought contest. The event was open to the public to watch as the teams were tested on their obedience, agility and criminal work. The judges described Nick and PD Ash’s performance as “amazing”.

PC Dalrymple said: “It is incredibly humbling to work these magnificent creatures. They give us their heart and soul to serve our communities and keep us safe from danger. It has been a great team effort and demonstrates the special skills that the dog section has in its armoury.”

He was praised by Andy Roebuck, Chair of Avon and Somerset Police Federation, said: “Over a long period of time Nick has shown his dedication and professionalism as a police officer and as a dog handler. Having worked with Nick in this capacity I know the huge effort and determination he puts into the training and capability of being an effective handler. The work he has done with Ash and before him Aden, has been truly outstanding and inspirational. PC Phil Hugget and PD Pan were also outstanding and did remarkably well in the trails. A real credit to Avon and Somerset Police Dog Section.”

It was the first time in the competition’s 59 year history that an officer has won the title twice, competing with two different dogs.

Temporary Chief Inspector Shane Hawkings heads Avon and Somerset Police’s tactical support unit, which includes the dog section, commented: “PC Dalrymple and PD Ash performed exceptionally well. I am extremely proud of having had two dog teams represent Avon and Somerset Police at this year’s National Police Dog Trials. Both PC Dalrymple and PC Phil Huggett have a great track record in protecting the communities we serve. As well as making numerous arrests, they have found many missing people, often some of the more vulnerable members of society.”