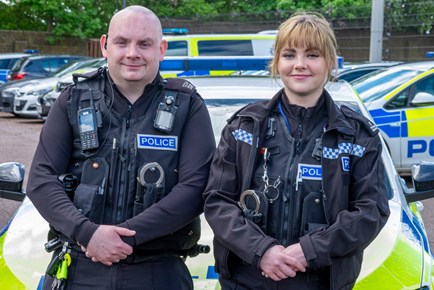 Two Leicestershire Police officers who courageously stepped forward to prevent a woman who was covered in petrol setting herself on fire have been nominated for The National Police Bravery Awards.

PC Owain Jones and PC Stephanie Kingston attended a report of a domestic incident in the Coalville area of Leicestershire in November 2020. They went to speak to each party separately and PC Kingston discovered that the woman was inside the garage.

PC Kingston tried to engage with her by speaking through the door, but the woman shouted that she had covered herself in petrol and that if she entered, she would set herself alight. It was clear from the very strong petrol fumes that this was not an idle threat.

PC Jones joined PC Kingston and engaged the woman in conversation, building a rapport to the point where she gave him permission to enter the garage so that they didn’t have to speak through a closed door.

As they entered, they found the woman huddled in a corner covered in petrol that she had poured over herself from a can. The fumes were overwhelming.

PC Jones suddenly saw a lighter in the woman’s moving hand and without hesitation he jumped on her to grab it. He was assisted by PC Kingston, who kicked the petrol can away and forced the lighter from the woman’s hand.

The woman was referred to safeguarding services after the incident.

Leicestershire Police Federation Chair Adam Commons said: “It was clear that the threat to life was real – and high. The brave actions of both officers have saved the woman’s life and they put themselves at risk of serious harm in order to do this.

“The incident went from 0 to 100 in the blink of an eye. But through great team work, quick and calm reactions and huge courage, this duo stopped a potential catastrophe.

“We are very proud of Owain and Stephanie – they are very worthy nominees for The National Police Bravery Awards.”

As nominees, PC Jones and PC Kingston will attend an awards ceremony in London on 9 December 2021.