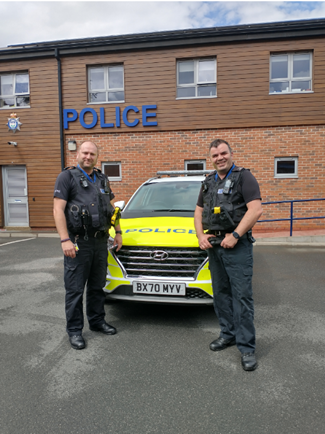 Two Leicestershire officers are to receive an award from the Royal Humane Society after they helped save the life of a cyclist.

PC Joe Lloyd and PC Laurie Appleton were driving along Lands End Way in Oakham when they saw a cyclist collapse on the side of the road.  He had stopped breathing and had no pulse.

The officers contacted the ambulance service but began administering CPR for almost 16 minutes.

A volunteer doctor with the charity - East Midlands Immediate Care Scheme (EMICS) - Dr Leon Roberts, was close to the location and attended the incident.

A nurse who was driving by at the time, Sue Baker, also stopped to assist the officers until the air and land ambulance arrived.

The cyclist was taken to hospital and underwent surgery before being discharged a few days later.

The officers were nominated for Royal Humane Society Resuscitation Certificates by the cyclist himself.

After news of the nomination PC Appleton said: “It’s a lovely honour to be put forward for this award.  We’d like to thank everyone involved in helping at the scene - this was definitely a team effort with assistance from Dr Roberts and Sue.

“EMICS is a charity and the medical team who staff the scheme are all volunteers who rely on donations from the public to keep the service going.  Dr Roberts happened to be local to the area and was able to respond and assist us.

“We just happened to be in the right place at the right time.  We are pleased the cyclist has made a recovery.  We wish him well and thank him for his nomination.

PC Lloyd added: “‘Like Laurie I am really pleased to be recognised by the society, we both feel like we were just doing our jobs and fortunately we have first aid training provided by our skills trainers at Leicestershire Police to thank for ensuring we have the training to be confident to carry out CPR. It’s a good time to remind people who may not be confident in CPR to consider looking online to refresh their memory or even get involved in a first aid class.

“I’d also like to echo Laurie’s praise for Sue who was off duty at the time and jumped into action, Dr Leon Roberts who is a voluntary EMICS doctor who swooped in and in his calm and professional manner throughout, the EMAS paramedics and the team from the Air Ambulance.”

Andrew Chapman, secretary of the Royal Humane Society, said: “Thanks to their swift action he is alive today but it could have been a very different story if they hadn’t reached him as quickly as they did.

“They were the right people in the right place at the right time. In cases like this it’s essential that CPR is started as quickly as possible if it is to be successful. This was almost immediate which meant that when the paramedics arrived he was in the best possible condition to be resuscitated. They did a wonderful job.

“This is another of many cases which show the value of as many people as possible, not just members of the emergency services, learning CPR techniques. It can, as it did here, make the difference between life and death.”

The Queen is the patron of The Royal Humane Society which is a premier national body for honouring bravery when human lives are saved.