PFEW Conference: Chair tells Home Secretary lack of vaccine priority for officers is a Government failing we will never forget 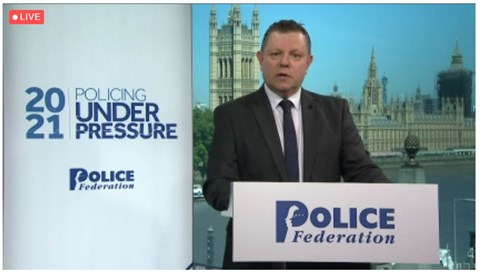 PFEW Conference: Chair tells Home Secretary lack of vaccine priority for officers is a Government failing we will never forget

The fact that police officers were not prioritised for the COVID-19 vaccine “is a failing of Government, and it’s a failing that we will never forget”, PFEW Chair John Apter has said.

Speaking at the PFEW Virtual Annual Conference, John said that officers felt a “deep sense of betrayal” about vaccines, adding that many younger officers at this month’s G7 Summit will not yet have received the vaccine and could be putting themselves at risk.

He played a video from 26-year-old Devon and Cornwall PC Leanne Gould, who is unvaccinated and will be working at the event. She said: “I do feel completely let down by the Government, as we’ve just been left to be exposed to the enormous risk of catching the virus.”

John also spoke about how police officers were “put in an impossible position” when they had to deal with constantly changing legislation during the pandemic and that “they became the focus of public anger and frustration”.

Not only did the police become the “villains of the pandemic” in many people’s eyes, John said, but they were also subject to COVID-related assaults, being coughed and spat at by people who said they had the virus.

John’s message to those offenders was: “You completely disgust me. And I know that you disgust every decent, law-abiding person.”

He lamented that there had been a huge increase in attacks on emergency service workers and police officers in particular, and welcomed the new two-year sentence for offenders.

But he said he would be “watching very closely” to make sure these harsher sentences are handed down in reality.

John had more demands for Home Secretary Priti Patel, asking her to make sure that police officers had all the safety equipment they needed, including Taser for every officer who wants it.

He also pressed Priti Patel on the pay freeze, saying: “This will hit the pockets of police officers who have absolutely stepped up during this crisis, often putting their lives in danger during this pandemic – this really does stick in the throat. How can that be right, Home Secretary, how can it be fair?”

John paid tribute to the police officers who had lost their lives over the past year and thanked all officers for their hard work during such a difficult time.

He ended his speech by thanking “hard-working and dedicated” Fed Reps, saying: “You are committed professionals who assist our colleagues, often during their darkest times. You juggle your role as a Fed Rep alongside your day job as a police officer, yet you still make time to help and support others...Thank you so much for everything that you do.”