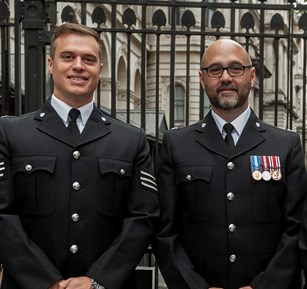 Three officers from Leicestershire Police are among 12 recipients unveiled today in the Civilian Gallantry List 2021 for their acts of heroism.

The Queen’s Gallantry Medal is awarded to Sgt Michael Hooper and PC Stephen Quartermain (pictured left to right) for their attempted rescue of five people following a helicopter crash at the Leicester City Football Club stadium in 2018.

Both officers put themselves at huge risk trying to save those onboard, sustaining serious burns and smoke inhalation as the helicopter became engulfed by flames. Tragically, they were unable to save the five people inside – the football club ‘s owner and chairman Vichai Srivaddhanaprabha; two of his staff, the pilot and another crew member.

Sgt Hooper said: “I feel incredibly honoured and proud to have been nominated for this award. Whilst it was extraordinary circumstances and something that no police officer would ever want to face in their entire career; I know that we only acted instinctively; how any other officer from across the country would have reacted.”

PC Quartermain said: “When I found out about the nomination I was shocked. It feels quite surreal, however I am honoured and humbled.”

“All of our officers responded heroically that day and both Steve and Mike ran towards the incident without hesitation, putting their lives at risk. They are both proud officers, and we in turn are very proud of them being recognised with the Queen’s Gallantry Medal.”

Chief Constable of Leicestershire Police, Simon Cole, said: “Our thoughts remain with the families and friends of those who lost their lives on that tragic day at Leicester’s beloved football ground. Lots of people were very brave that day but both Mike and Steve showed true heroism; acting on their instincts and risking their own lives to try and save others. It is a great honour that they are being recognised in this way – an honour they both deserve. I am extremely proud of them and everyone who responded on the day and the days following the tragedy.”

The Queen’s Commendation for Bravery is awarded to PC Shaun Randall. Shaun was on duty with colleagues on February 2018 when a building on Hinckley Road exploded. The blast was so strong they thought something had hit their car. Without hesitation or concern for their own safety they rushed to the scene and were faced with a significant scene of devastation and destruction. Shaun acted selflessly and at great personal risk. When it became apparent that the fire was spreading he crawled into the rubble and managed to pull a young man to safety before the fire took hold. He undoubtedly saved his life and that of others thanks to his actions.

Sadly five people died that day; Mary Ragoobeer, her two sons Shane and Sean and Shane's girlfriend Leah Reek. Shopkeeper Viktorija Ljevleva, who was the girlfriend of one of the men who plotted the explosion, was also killed.

Three men were subsequently found guilty of their murder at the trial.

PC Randall said: “I am truly honoured and humbled to receive this award for bravery at such a sad and tragic event in which people needlessly lost their lives.”

Adam added: “Sean’s actions that day undoubtedly saved the life of that young man, and spared another victim of this awful incident. The manner in which he risked his own safety is deserving of recognition in the form of the Queen’s Commendation for Bravery. Our thoughts remain with the families and friends of the victims who lost their lives.”

CC Cole said: “What Shaun did on the day of the explosion went above and beyond the call of duty and his immediate actions undoubtedly saved lives. He put his own life at risk arriving at the scene only minutes after the explosion and showed true heroism and bravery. I am very proud of him and everyone who reacted so professionally to such a tragic incident. Our thoughts remain with the families and friends of those who lost their lives on that day.”