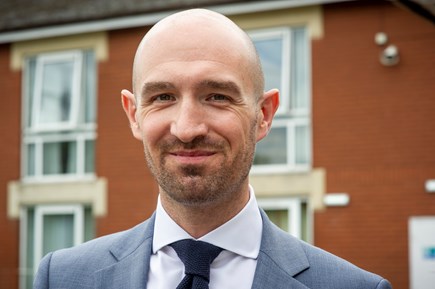 On the appointment of his new role, Jon said "I feel incredibly honoured and proud to be stepping into this position. It really isn't something I expected when I took on the role of Trustee. I have a different leadership style, I like everyone to be involved in the decision making. I don't like to impose my own views, and I am very happy to learn from others. I really want to bring openess and transparency, and let everyone be a part of what is going on.

I'm obviously a police officer, although my day job is the Secretary of Leicestershire Police Federation, but as part of that I also run our Federation’s insurance scheme and the medical scheme. Our Federation is unique in that we have a medical scheme. I am also a Trustee on the Gurney Fund, which is a charitable company just like Flint House - but their aim is to support children of officers who are killed in the line of duty or medically retired. It allows children financial support to forward their education and life experiences if the finances are not there.

I am excited about Flint House's future. It is my greatest desire to see Flint House help every officer who wants help to get back to full duties as quickly as possible, within capacity and reach. I want Flint House to move with the times, and really take advantage of all the technical advances in treatments. We're already going that way with the Anti-Gravity Machines. We're not in competition with the NHS, but we can certainly offer a shorter waiting list and a much more personalised experience. We aim to exceed the  level of care you would receive if you were to go private.

I would encourage officers to carry on donating. The struggle we have is with new recruits, and really pushing the value of paying into Flint House. Often young recruits think of themselves (and why shouldn't they) as young and fit. The general feeling is 'why would I need physio?' and they more than often don't see it as an investment in their colleagues. But that is exactly what it is, with help from Flint House there will inevitably be more police officers on duty, which relieves the pressure. It is about the bigger picture. My message to anyone who doesn't see the value in the services that Flint House offers is this: you just don't know what is around the corner. I have seen it first hand, with a young officer in particular, needing Mental Health treatment following a vicious assault. It was then they  realised that not only had they not signed up to Flint House, but they hadn't even joined the Federation. But it wasn't too late, and they have since received the  treatment they needed. It's good to remember that no one is bullet proof."

My thanks go to the previous Chair Ian Wylie who laid the ground work for the strategic review to take Flint House forward. I will now endeavour to support the team to deliver on those milestones.