Federation Detective Lead highlights the challenges of the role 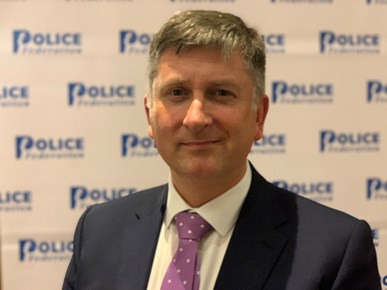 Federation Detective Lead highlights the challenges of the role

Leicestershire Police Federation’s Detective Lead has highlighted the challenges of the role and why some officers shy away from going down the CID route in their careers.

Detective Inspector Simon Preston, a representative for Leicestershire Police Federation, was speaking as part of the Police Federation of England and Wales’s month-long focus on the issues that detectives face.

Simon said: “I think there are a couple of reasons why we’ve been struggling with recruitment, and some of that goes down to the way that we’ve designed the rest of policing. We used to run the model of general duty officers, pretty much everybody did everything initially.

“And then people then went into a specialism, whether that was an operation specialism such as firearms or tactical support teams, or neighbourhood policing, intelligence or investigation.

“We moved away a little bit from that and response policing became a speciality in its own right and people got a lot of skills through driving, through Taser, but, with the greatest respect to them, very little ownership of caseloads. So they could come in, they could work hard for the period of their shift and then went back home. Yes, they face risk. Yes, they face danger. But they didn’t carry that workload away with them.

“Then they came into our neighbourhood investigation units (NIU) and purely dealt with investigation. That could be everything from minor assaults all the way through to some of the more serious types of crime, and had crime queues of 15, 20 jobs, could get prisoners dropped on them with a few hours left of their shift and ended up working excessive hours. It became really, really difficult on the small percentage of people within those NIUs compared to all the people on response.

“I think detectives lost a lot of credibility because, certainly from what the response officers were seeing, detectives were just part of an NIU, they didn’t have a specialist position within it, and ended up having to deal with the same matters that everyone was dealing with. It was almost, ‘What is the point of being a detective?’”

He said: “It’s only recently that they’ve started to put changes in place to go back to a model of omnicompetent police officers, general duty officers, who dealt with response issues, that dealt with crime, and a CID team who sat alongside that but dealt with the more serious stuff, the burglaries, the robberies, the serious assaults, the serious sexual assaults. So almost putting a bit of kudos back into the role.

“I think we’ve missed that for a long period of time and therefore we’ve struggled with recruiting staff. Also, as time has gone on, people don’t want to be here until the early hours of the morning dealing with prisoners or back in the next day after only having six hours’ sleep to crack on with dealing with something that’s really serious. They want to have a home life.

“CID is busy. It is busy and there will be times when you can’t plan your workload because you will be kept on, you will be dealing with prisoners until God knows what time in the morning and I think, while that may be appealing to some people, there are a lot of people who will be put off by it.”

But Simon said that being a detective was “a fantastic career” that more officers should consider.

He said: “It is a brilliant job. It’s so rewarding. Within Leicestershire we’ve got a six-month attachment to CID where officers, as long as they’re supported by their line managers, will come in and see how they get on. Give people a chance to make sure that this is the career that they envisage it to be and want it to be. It is still a fantastic career, not without its challenges, but it is a fantastic career.”

Simon said it was right that officers learn the grassroots of policing and then choose which direction they want to go in.

He said: “I’m hoping that as we move further down the line, there’ll be more people who, once they’ve done that bit of time back in the response policing world and they’ve gained those experiences, they will think, ‘Actually I’d like to give CID a go now’.”