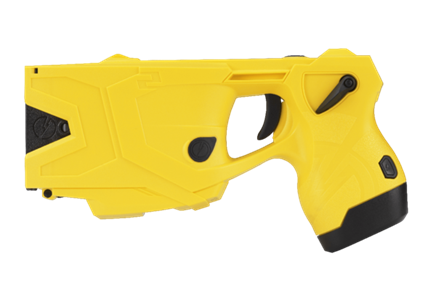 75% of Leicestershire Police officers think all colleagues should be issued with a Taser on duty.

A survey of police officers, commissioned by Leicestershire Police and Leicestershire Federation, shows that front line officers on the whole would feel safer and wish to be trained in the use and carrying of Taser.

The survey, which was sent to police officers in December and January, was completed by 906 officers, 74% of them PCs. That represents around half of the force.

78% of Leicestershire Police officers who don't currently use Taser said they would like to carry a Taser on duty, following appropriate training.

Nearly 40% of officers who responded said they had been assaulted on duty in the past two years. When asked if they thought carrying a Taser would have made any difference and made them feel safer, 63% answered yes.

"With Taser training and also the overt carrying of the yellow Taser, police officers are less likely to be assaulted."

He added: "The most important thing is that of public perception. Taser is rarely discharged because of the rigorous training and the ethos that the discharge of Taser is as a last resort and used only against the most violent offenders.

"The tried and tested community focused policing will always be at the heart of UK policing. Taser has been carried by trained officers for many years, the only consideration is that towards a wider audience of officers."

The hundreds of officers who responded to the survey provided some viewpoints and comments on Taser.

One officer wrote: "A male was assaulting me. I got him off and drew my baton, but it didn't deter him. He still attacked me while withstanding three baton strikes. With a Taser, I believe I could have stopped him before he struck me even once."

Another respondent wrote: "I was assaulted in a park at night while single crewed. An offender started to attack me when he realised I was by myself. The subject attempted to take my baton off me and dragged me to the floor, ripping my uniform off me. I do not carry Taser, but I would have used it if I did."

"Taser is a deterrent and has a huge visual impact on offenders," wrote one officer. "This is a great tactical option for officers and gives them a greater sense of security for their own personal welfare when they're being single crewed."

Another wrote: "The use of Taser needs to part of the PPE equipment that officers on the front line should be carrying."

Several respondents pointed out that they were often waiting for a long time for a colleague with a Taser to arrive at the scene. If more officers carried Taser, they could respond to local incidents faster.

However a minority of officers who filled in the survey were more cautious in their response.

One officer wrote: "I personally would have concerns, following the recent instance where an officer was prosecuted following a Taser discharge. Therefore I would be reluctant to carry a Taser."

The results of the survey have been shared with the force's senior management team. The force is currently carrying out its own survey seeking public "feedback on plans which could see the number of Taser-carrying officers increase over the next two to three years."

Please click the link to complete the survey: https://www.surveymonkey.co.uk/r/JRY8K78