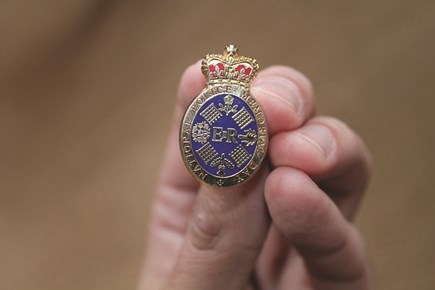 On Sunday 29 September, the Police Family will head to Glasgow to mark National Police Memorial Day to remember fallen colleagues from across the country.

National Police Memorial Day Co-ordinator Canon David Wilbraham said the event will serve as a timely reminder of the sacrifices officers have made, as well as the real threat they face on a day-to-day basis.

He said: “I think it’s important to remember them, that we remember officers who have made the ultimate sacrifice in the course of duty. I’m always mindful that when we do that, other officers who are there and their families will be thinking, ‘it could have been me’. So it’s very poignant for those.”

National Police Memorial Day was founded in 2004 by Joe Holness, a Kent Police officer whose colleague had been killed on duty.

More than 4,000 fallen officers are commemorated and remembered every year.

David said the event offers fellow officers, friends and family the opportunity to pay their respects to their colleagues and loved ones.

He added: “There will be ordinary officers there who just want to be there who have lost a colleague, officers who want to support the day because they see it’s important and, increasingly, a good number of officers from overseas.

“We’ll be joined by senior Government ministers, by senior officers from forces across the country, and by members of the service, and most importantly, the real VIPs – the families of those who have died on duty. And in the course of that service we will remember them, call them to mind.”

Despite the solemn nature of the day, David said that the memorial service is a fitting tribute to the officers who have died in the line of duty, but also for the families who have lost a loved one.

He said: “Seeing the families and knowing how important it is for them that we do remember, that we acknowledge their loss, that they feel part of the police family because I think when you join the police actually you then have two families.

“You have your own family, those who are closest to you, whose love was the strongest and whose loss is the greatest. But you’re also part of that police family and that goes on in your own force but also across the country. Families knowing they are part of that family is really important.”