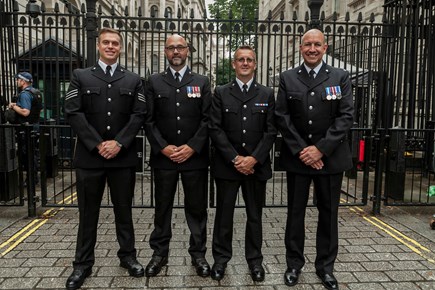 Four Leicestershire Police officers who fearlessly risked their own lives to try and rescue the occupants of a crashed helicopter outside Leicester City’s football stadium have been at Downing Street as part of The National Police Bravery Awards.

Sgt Mike Hooper said “It’s an absolute honour to be here today with my colleagues, hopefully it will be an amazing day.”

PC Steve Quartermain added “I’m really proud to represent Leicestershire and to be here with these fine gentlemen.”

The Leicestershire officers will join 67 colleagues from across the country in attend a glittering reception and an evening awards ceremony in London in July.

The four officers were policing in the vicinity of the King Power Stadium on the evening of 27 October last year – following the Leicestershire v West Ham Premier League match  –   when they heard reports of a crashed helicopter.

They sped to the scene and were the first to discover the burning wreckage just outside the stadium.

The officers bravely ran towards the crash scene and the flames to try and preserve life – in the finest traditions of British policing.

Despite their desperate efforts the officers  –  who sustained heat and scorch marks to their faces –  were unable to save the occupants of the helicopter.

As has been widely publicised, all five occupants of the helicopter sadly died, including the Chairman of Leicester City Football club Vichai Srivaddhanaprabha, two of his staff, the pilot and another crew member.

Looking back on the evening, Sgt Hooper said: “The day started as any other day does – we were there to police a football match. What we faced by the end of the evening was something that we wouldn’t have expected.

“It was extraordinary circumstances and something that no police officer would ever want to face in their entire career. We only acted instinctively how any other police officer across the country would’ve reacted.”

He added: “We were just doing our job. We have had to come to terms with the fact that we couldn’t save the five victims.”

PC Marsh said: “I’ve never really thought about what I actually did that evening but placed in that situation would I do the exact same thing again? Yes I would.”

The actions of the officers that night were praised widely by the fans and public who saw how valiantly they fought to save lives that night, risking their own safety in the process. The press hailed them as heroes.

PC Quartermain said: “It’s a real honour to have been nominated for the National Police Bravery Awards. I think we probably represent the actions that we took on that night but also the actions of the other officers were exceptional in managing the operation and recovering everything else afterwards as well.”

PC Hinton said: “To be nominated for the National Police Bravery Awards is overwhelming and really honouring.

“I feel really proud to have been nominated and to represent Leicestershire Police in that.”

Dave Stokes, Chairman of Leicestershire Police Federation, said: “Our four officers acted with real bravery, rushing towards the crashed helicopter. In the blink of an eye, they risked their own lives in an attempt to get to the occupants. Sadly it wasn’t with a better outcome.

“When the officers were told Leicestershire Police Federation had nominated them for the National Police Bravery Awards, they became emotional and said, ‘yes we risked our lives in attempt to save those five people in the helicopter, but isn’t that just what we do?’

“They should be incredibly proud of their courageous actions that night.”

The event – the 24th edition of the National Police Bravery Awards  –  is sponsored by Police Mutual.

John Perks, Chief Executive Officer of Police Mutual, said: “Police Mutual is very proud to be supporting the Police Bravery Awards for the 11th consecutive year.  My colleagues and I are deeply honoured to be able to show our appreciation for police officers’ bravery in keeping us safe.”