The Derbyshire PC who played such a critical role in protecting Whaley Bridge from disaster during the Toddbrook Reservoir crisis has been presented with a regional award at the national Police Bravery Awards.

Geoff Marshall was overwhelmed at the recognition.

“To win a national police bravery award is absolutely fabulous and very humbling. There are so many incredible stories from lots of officers all trying to do the right thing. It’s just fantastic and I never expected it or even thought of it,” he said.

“Geoff is a very worthy winner of this prestigious award. He put his life on the line to protect others, volunteering to carry out a role that was obviously extremely dangerous. He plays down what he did, and quite rightly points out that he was part of a huge team effort, but I really do believe that what he did was exceptionally brave and this recognition is very much deserved.”

The awards ceremony in London last night, also attended by Chief Constable Rachel Swann, followed a Downing Street reception hosted by Home Secretary Priti Patel where Geoff and his wife Jennifer met the other 92 nominees for the 2020 Police Bravery Awards. The awards were delayed last year due to the pandemic.

While in Downing Street, Geoff was introduced to Ms Patel who said she remembered the events at Whaley Bridge. Afterwards Geoff and Jennifer said the afternoon had felt surreal.

Geoff was put forward for the bravery awards by the Force’s Operational Support Department and selected as its nominee by the Branch Board of Derbyshire Police Federation.

The tense and dramatic events at the reservoir began on Thursday 1 August 2019 and were played out across the world’s media. Days of heavy rain had sent water raging over the dam wall, taking with it a huge section of the structure.

Engineers estimated it was likely that the entire 250-metre long dam would fail sending billions of litres of water onto the town.

The emergency operation kicked in with officers in the potential flood area evacuating 1,000 people in the middle of Whaley Bridge from their homes and businesses.

At the dam, it was critical that sandbagging was completed to try to prevent the structure from collapsing. As heavy rain continued to fall, a plan was drawn up to put hundreds of sandbags in place to divert water away from the damaged section.

Tony explained: “The sandbagging needed to be performed by a member of staff on the actual spillway and others on a metal bridge passing the bags down.

“Engineers briefed the police officers and several volunteer members of mountain rescue that should certain tell-tale signs be visible either on the water or on the downstream side, that they would have between 45 seconds and a minute to evacuate the entire area before the dam wall would collapse beneath their feet.

“In reality, were the dam to have failed it is highly unlikely any of those involved in the sandbagging operation would have survived. The control measures such as ropes and personal flotation devices provided some protection in the event of an officer falling into the water rather than the dam failing.

“All the officers present elected that they could not stand by and risk the death of around 2,000 people, including colleagues, without doing something.”

Geoff volunteered to work on the spillway and secured himself with a rope while his colleagues passed the bags down.

For around two hours, officers and mountain rescue worked to place sandbags on the wall and buy enough time to temporarily secure the reservoir.

As he worked on the dam, colleagues who were looking out for signs the dam was beginning to breach suddenly shouted at him to get off.

Tony said: “At this point, Geoff was positioned on the spillway, secured with a rope and was at significant risk and there was a delay in him being unsecured so he could make his way off safely.”

He added: “Actions of officers completing the sandbagging operation on the spillway undoubtedly reduced further erosion to the dam wall and prevented a devastating breach.

“There were many officers involved in the incident and I would like to acknowledge their bravery and outstanding efforts too but Geoff went over and above the call of duty while thankfully supported by his colleagues.”

The following morning an RAF Chinook helicopter was deployed and, over the next five days, 530 tonnes of aggregate were used to reinforce the dam wall.

After a tense seven days, the dam wall was repaired and the water pumped out.

Geoff has also received a Chief Constable’s commendation for his brave actions. 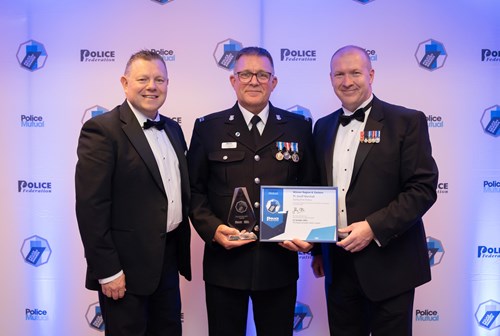