The suspects in the Salisbury Novichok attack should be "brought to justice", Theresa May has said ahead of a meeting with Russian President Vladimir Putin at the G20 summit.

The PM told the BBC that Russia needs to stop its "destabilising activities".

The UK believes two officers from Russia's military intelligence service, the GRU, were behind the poisoning of former spy Sergei Skripal and his daughter Yulia in March 2018.

The Kremlin denies any involvement.

Mr Skripal and his daughter both survived the poisoning but last July a British woman, Dawn Sturgess, died after coming into contact with Novichok through handling a contaminated perfume bottle.

Scotland Yard and the CPS say there is sufficient evidence to charge two Russians - who go by the names of Alexander Petrov and Ruslan Boshirov - for attempted murder.

However, Mr Putin has insisted they are civilians, not criminals.

Friday's meeting, on the margins of the G20 summit in Osaka, Japan, is the first formal bilateral meeting between the two leaders since the 2018 attack.

Speaking to BBC deputy political editor John Pienaar, Mrs May said the poisoning was a "despicable and irresponsible act" and the UK has already set out evidence and made charges against two Russians.

"Russia does not allow the extradition of its nationals, but European arrest warrants are out for those two individuals and if they set foot outside Russia we will be making every effort that they are brought to justice," she said.

"Russia needs to recognise its acts and stop acting in this way - and stop its other destabilising activities around the world, including, for example, its use of disinformation and cyber-attacks," she added. 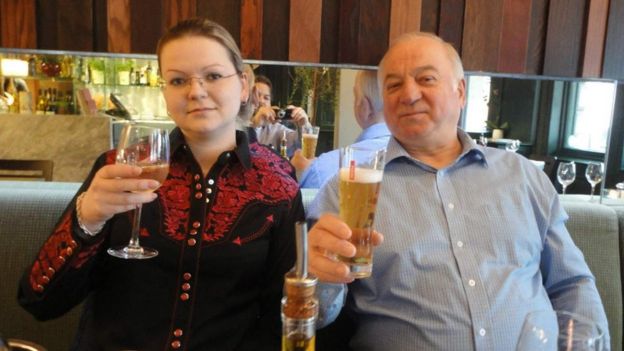 In a separate interview, Mrs May said her decision to meet Mr Putin did not mean it was "business as usual" with Russia.

"It can't be business as usual with Russia until they stop the sort of acts we have seen them doing around the world," she told ITV News.

Meanwhile, in an interview with the Financial Times, Mr Putin attacked liberalism, a core principle of western democracy, declaring it "obsolete".

He also said he hoped "a few preliminary steps" would be made towards restoring relations between Russia and the UK.

However, he appeared to have little sympathy for Mr Skripal. The former Russian military intelligence colonel was jailed after being accused of spying for Britain, before being released as part of a spy swap.

"Treason is the gravest crime possible and traitors must be punished," Mr Putin told the newspaper.

"I am not saying that the Salisbury incident is the way to do it. Not at all. But traitors must be punished."

He added: "Listen, all this fuss about spies and counterspies, it is not worth serious interstate relations. This spy story, as we say, it is not worth five kopecks. Or even five pounds, for that matter."

The Russian President has previously labelled Mr Skripal as a "traitor" and a "scumbag".

The Skripal poisoning froze relations between Russia and the UK. The UK expelled 23 Russian diplomats who Mrs May claimed were undeclared intelligence officers following the Salisbury attack, and Russia responded by also expelling UK diplomats.