Wiltshire Inspector Ian Stevenson who risked his life to save a vulnerable woman from an oncoming train has won a prestigious Police Bravery Award.

Inspector Stevenson (now retired) was named as the Region 6 (South West) winner at the 23rd national Police Bravery Awards in London on 12 July, hosted by the Police Federation of England and Wales.

Inspector Stevenson helped search for a vulnerable woman and found her by the railway line, when a train appeared and the woman ran onto the track.  He grabbed hold of her and wrestled with her to get her to safety.

The train then passed, narrowly missing them by a couple of feet. His colleague described it as “like something out of a movie” and that her heart skipped a few beats, until the train had passed and she could see that Inspector Stevenson had the woman safe on the embankment. Inspector Stevenson calmed the woman down and spent time reassuring and talking with her.

At the awards evening Inspector Stevenson, said: “I am humbled to be in the company of so many brave people. I honestly don’t see what I did as standing out – it’s just what I do. It’s just part of being a decent human being - you just try to help people. And - after 30 years of service - getting some recognition is quite nice.”

Calum Macleod, Chair of the Police Federation of England and Wales, said: “The courage and professionalism shown by Inspector Stevenson went above and beyond the normal call of duty. He showed exceptional bravery, and thoroughly deserves to win this award. Thank you for your dedication to helping to keep the public safe”.

Stephen Mann, CEO of Police Mutual, said: “Over the last 10 years, Police Mutual has been proud to have sponsored such an inspirational event in the policing calendar and for my colleagues and I to be able to show our respect for the exceptional courage shown by police officers who risk their lives every day to protect the public and keep us safe”. 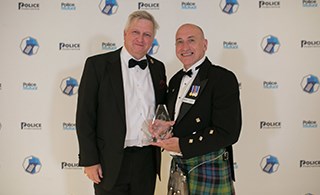