Politicians in Salisbury have blasted a Russian state-run broadcaster which sent chocolate models of the city's cathedral as a festive gift.

RT said the edible item reflected one of the "biggest news stories of the year" and was sent to "multiple" recipients in the media and beyond.

Russian ex-spy Sergei Skripal and his daughter Yulia were poisoned in Salisbury in March.

Salisbury MP John Glen said: "This is bizarre behaviour but to be expected."

An image of the intricate chocolate model wrapped in RT-branded ribbons was shared by the Russian channel TV Dozhd, also known as TV Rain.

In a tweet, Dozhd thanked RT for the gift but added: "Come for tea, we're afraid to eat it alone."

She added: "It's very regrettable that somebody would see fit to do something like this, and is quite disrespectful to those that were caught up in the incident."

RT, previously known as Russia Today, interviewed the two men named as suspects in the poisonings. They claimed they were merely tourists visiting Salisbury at the time.

The men, named as Alexander Petrov and Ruslan Boshirov, said friends suggested they visit the "famous Salisbury cathedral" and "its 123m-tall spire" but had decided against it because of "muddy slush everywhere".

An RT spokesperson said the chocolate model had been sent as a gift "in the spirit of the Holiday Season" to "multiple friends, peers and partners in the media sphere and beyond".

"As a news organisation, every year we put together presents that reflect one or several of the biggest news stories of the year," the spokesperson added.

"In 2018 we chose to highlight the internationally-resonant interview conducted by RT's own editor in chief."

The Skripals survived being poisoned by the nerve agent Novichok, but Dawn Sturgess - a woman not connected to the Russian events - died in July having been exposed to the same substance. 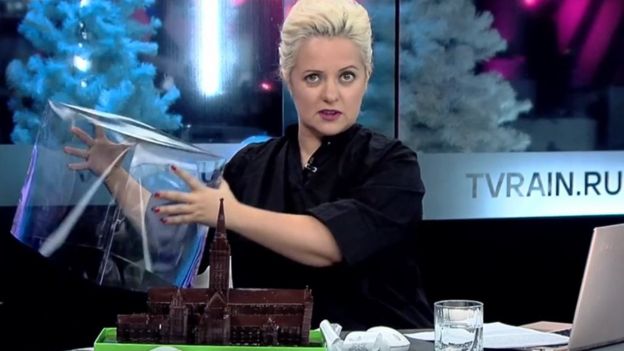