The government is to provide another £2.5 million to help cover the extraordinary policing costs of the Novichok related incidents in Salisbury and Amesbury.
The related operational costs for Wiltshire Police will be above £10 million pounds.  This extra money puts the government's total funding for these poisonings at £6.6million.

It will leave a hit of at least £3.4million on Wiltshire Police's already very stretched budget.

Policing Minister Nick Hurd MP has acknowledged the ‘excellent work undertaken by officers and staff in response to these incidents’ and recognised that the incidents had ‘placed an unprecedented pressure on Wiltshire Police.’

The 'pinned' tweet at the top of Wiltshire and Swindon Police and Crime Commissioner, Angus Macpherson's twitter account announced the expect unusual costs and states: "I fully expect all costs to be met centrally by the Government." 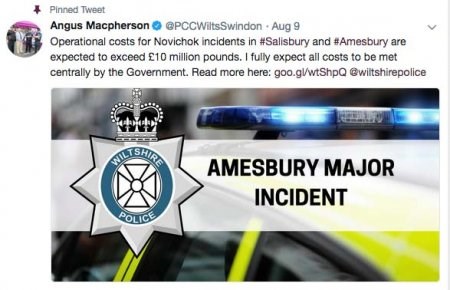