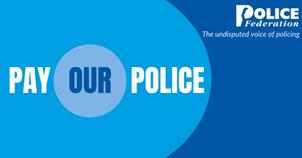 Police Officer pay now needs a huge hike as it has dramatically fallen 20% behind the cost of living over the past decade+.

Phil Matthews, Chair of Wiltshire Police Federation, said: “All we are asking for is fairness. The Government have already shown their complete lack of respect for police officers and it’s time for this to change. Police Officers do a dangerous and unique job that needs fair recognition in our pay.

“I ask our MPs and politicians to stop and think for just a moment. Calculate what losing nearly 20% of your pay would feel like, what it would feel like to feel undervalued and constantly attacked. All I ask is fair pay. I do not seek unreasonably high pay but only what is fair.

“Police officers are leaving policing because they can’t afford it. The basic rate of a new police officer brings home less than £1,400 per month. Would our ministers and politicians live on that with increasing national insurance, fuel prices that are increasing dramatically? I doubt it.

“Enough is enough, it’s time to stop using police as the obvious choice for pay attacks. Treat our Police Officers fairly and pay them what they are worth. I cannot help but wonder if the lack of ability to take industrial action is what spurs our Government on to choose policing to attack first.”