PFEW Conference: Officers shouldn't be going to food banks and taking out payday loans... It's not right for the job they do 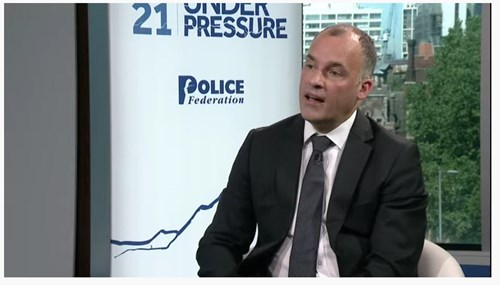 “We've got evidence of officers going to food banks, taking out payday loans... It's not right for the job they do,” PFEW Deputy Secretary John Partington said at the Federation’s Virtual Annual Conference.

Speaking at the Pay, Conditions and Pensions session along with National Secretary Alex Duncan, John said: “There have been many years where police officers’ pay has been eroded, and it’s impacted on officers’ standard of living.”

Both men spoke about the fact that the Government doesn’t have to follow the recommendations of the Police Remuneration Review Body (PRRB), and Alex pointed out: “There’s no right of appeal or arbitration for us.”

Pay freezes, as well as the pensions debacle and the public opinion of policing, has had a knock-on effect on officers’ morale, which John said was “decreasing all the time”.

There were some initiatives to incentivise officers to do certain roles, such as Targeted Variable Payments, which provide some officers with an extra £5,000 a year, but John said there was a danger it ended up in male-dominated areas of the force. He called for equality impact assessments, saying: "There could be some groups within policing who are disadvantaged."

Another element of pay reform is the Pay Progression Standard, which is meant to show a clear link between pay and productivity. However John said it was just “an extra hoop for officers to jump through".

Alex spoke about how when decision-makers tried to solve one area of police pay, they often caused other problems, “like moving life jackets around The Titanic”. He said: “At the moment they struggle to get people to be Detectives...the answer may well be to look at the remuneration and ask, is that the correct amount if you want people to put themselves forward to pass an exam? But that discussion has not happened.”

Pensions were also a big issue, Alex said, as on the new scheme, "officers don't know when they can retire or what they're entitled to". He said: "I think it needs to be screamed from the roof – it's not fair and it's not right."

John added: "We won't hesitate to challenge things legally if the grounds are there."

One officer who called into the session asked if the police should have the right to industrial action to make sure their concerns are listened to, but Alex said it was more important to have meaningful negotiation rights. He added: “When we stand together, our voices are loud and effective.”